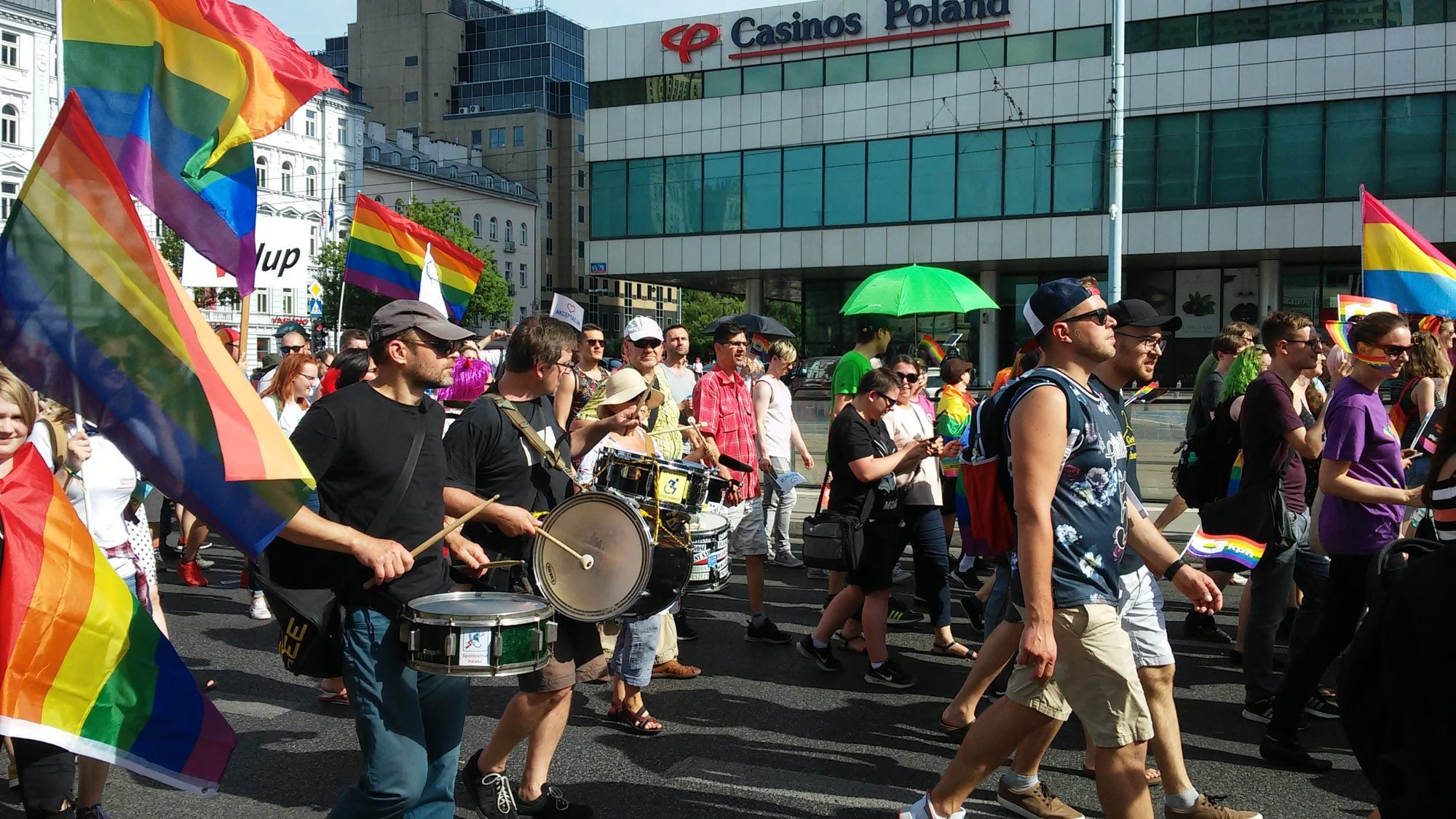 Although LGBTQI+ activists in Poland are under attack from the Law and Justice government’s conservative agenda, domestic activists are finding ways to resist and persist.

Since the 2015 election of the right-wing Law and Justice Party (PiS), Polish civil society has been under attack by the ruling party. This is particularly true for LGBTQI+ activists following the establishment of so-called LGBT-free zones around Poland. With the support of the Catholic Church and other conservative parties, the current government has exacerbated the crisis of LGBTQI+ equality.  Jarosław Kaczyński, the leader of PiS, regularly criticizes gay activists and calls the LGBT movement “a threat to the very foundations of our civilization,” while Poland’s President, Andrzej Duda, won reelection this July after a campaign that called the pro-LGBTQI+ movement an “ideology” more dangerous than communism.

Homophobic rhetoric is not new to Poland. Political conservatives supportive of the current government have long maintained that rights for gay people stand in stark opposition to everything that is Polish and Christian. In the last few years, this vitriol has been matched by increasing violence and restrictive laws and policies against civil society activists of all kinds, intensifying dissent at home and pushing some Poles to seek a future abroad. These policies include, among others, President Duda’s veto of the act on transgender rights; Duda’s instructing of regional prosecutor’s offices to investigate same-sex couples that married outside of Poland; the liquidation of the Council for the Prevention of Racial Discrimination; and new limitations on the Assembly Law. Although the government has been consistent and persistent, civil society has risen to the challenge.

Supporters of PiS maintain that the term “LGBT-free zones” is a totally made-up slogan or fake news created by gay activists themselves. The term conveys the idea that Poland should be “free” from LGBTQI+ individuals and their “ideology.” In truth, LGBT-free zones have their roots in the conflict between the PiS-dominated central government and PiS-ruled towns and counties in rural areas (predominantly in eastern and southeastern Poland) and what the media refers to as “urban bastions” of progressive liberalism. These strongholds of liberal democracy include the cities of Warsaw, Poznań, and Gdańsk, which are governed by mayors and local officials from the major opposition party, Platforma Obywatelska (Civic Platform).

In February 2019, the mayor of Warsaw, Rafał Trzaskowski, indicated his support for the Warsaw Declaration of Municipal Policy for the LGBTQI+ Community, a document based on the World Health Organization’s standards on sexual and anti-discrimination education. The government of Poznań later adopted a similar document. These decisions infuriated Kaczyński and his supporters. PiS ally Ordo Iuris, an ultra-conservative NGO based in Warsaw, intervened to help pro-PiS municipalities pass declarations that would reverse anti-discrimination efforts and broadcast a town’s opposition to gay rights. In these anti-gay declarations, municipalities confirm their support for traditional Polish values that are in opposition to LGBTQI+ ideology, which detractors claim seeks to bring about a cultural revolution in Poland and the sexualization of children.

During the July 2019 anti-gay protests in Białystok, the pro-government newspaper Gazeta Polska distributed LGBT-Free Zone stickers. Ever since, conservative groups have used the term to both intimidate activists and rally PiS supporters, helping local communities create laws and proclamations to establish de facto LGBT-free zones while avoiding this specific terminology. Currently, nearly one hundred local governments, representing about a third of Poland’s territory, have declared themselves to be free “from the [LGBTQI+] ideology.” Liberal municipalities have responded in kind, creating even clearer legislation in support of sexual diversity and equity. In support of this effort, human rights activists developed a virtual map of Poland to highlight the ongoing battle for Poland’s soul. To counter this behavior, activists and supporters of gay rights have declared their support for traditional Christian values, creating alternative stickers that seek to create zones free from hate in Poland.

LGBT-free zones and ultra-conservatives in Poland’s parliament contribute to the polarization of Polish society, which shows no sign of abating. The deepening cleavage between urban and rural communities, or what can be considered Poland’s East-West divide, contributes to the country’s degenerating democracy. In 2015, PiS used a populist, conservative platform to win electoral victory by connecting the country’s economic problems to fears of asylum-seekers. Since a migration crisis never materialized, PiS has since focused on gay activists as its new scapegoat.

Białystok’s 2019 Pride Parade, which was the inspiration for Gazeta Polska’s LGBT-free zone stickers, was one of Poland’s most violent protests in recent years. At the parade and protest, 4,000 ultra-conservative youth faced off against 1,000 Pride attendees. Numerous people were injured, and about twenty were arrested as gay-activists were attacked with rocks, cobblestones, bottles, and firecrackers. Although street violence pushed some gay activists to leave Poland      because of fear of persecution, it also mobilized thousands of other gay rights activists and their allies, who remain intent on ensuring that Poland remains a democratic, progressive country where everyone is welcome and treated equally.

Anti-LGBTQI+ sentiment in state-sponsored media also threatens Polish civil society groups. LGBTQI+ organizations, along with women’s rights organizations and Polish judges, are subject to numerous smear campaigns conducted via public media under government control. The twin objectives of these campaigns are to discredit the opposition while furthering an ideological agenda against women’s reproductive rights and gay rights. In 2019, the state media infiltrated the NGO Kampania Przeciw Homofobii, KPH (Campaign Against Homophobia) to record demeaning footage of its members and affiliates. The accounts were aired right before the      parliamentary elections in the pseudo-documentary Invasion, which portrays gay activism as a “foreign ideology,” hoping to mobilize Poles to fight against these so-called “occupiers.” As in Russia and Hungary, foreign agent rhetoric and laws are the cornerstone of efforts to curb civil society activism. In this way, Kaczyński does not hide his admiration for Viktor Orbán and his demagogic anti-LGBTQI+ Hungarian legislation.

According to Human Rights Watch, PiS regularly scapegoats gay people and “sexual and reproductive rights activists for political ends, under the banner of what is called gender ideology.” A 2020 survey that ranks European countries in terms of their legal policies concluded that Poland is the European Union’s most homophobic country. This is not a surprise, given, for example, the arrests of gay rights activists in recent years.

The government’s conservative, anti-LGBTQI+ campaigns also affect Poland’s public education. In October 2020, the government appointed ultra-conservative Przemysław Czarnek to be the new Minister of Education and Science. Already, the Polish parliament has debated proposed laws that could punish individuals who teach sex education with three years in prison.

However, it is worth noting that the rights of individuals and the state of human rights in Poland, depends a lot on the city or town and its leadership. Poznań and Warsaw, for example, have open-minded mayors and progressive leadership in the Catholic Church. However, in many places, people are afraid of the government. In municipalities proclaiming themselves to be “LGBT-free zones, ” this is especially the case for LGBTQI+ individuals and their allies.

What Can International Actors Do?

Many European leaders have reacted strongly to these developments. In her first State of the Union speech as head of the European Commission, Ursula von der Leyen told Members of the European Parliament in Brussels that “LGBT-free zones are humanity-free zones, and they have no place in our Union.” In December 2019, the European Parliament passed its resolution calling on the Polish government to condemn discrimination against LGBTQI+ individuals and local government laws violating the rights of sexual minorities. Although European institutions are limited in what they can actually do, they do have ways of attenuating these policies through grants and funds provided by the European Union. For example, six Polish municipalities were recently denied EU funding in its urban partnership program, because, as Commissioner for Justice and Equality, Helena Dalli, explained, “EU values and fundamental rights must be respected by state authorities.”

EU offices are not the only institutions with influence. In fact, countries and cities all over the world can pressure Polish cities and leaders to rethink homophobic policies by distancing themselves from the places and people who proclaim these ideas. For example, in France, various sister towns of LGBT-free zones ceased their official relations with their Polish counterparts. Other municipalities across Europe followed this trend. Last July, the Dutch town of Nieuwegein with longstanding ties to one of Poland’s LGBT-free zones, Puławy, permanently severed its relationship with the town as a demonstration of its commitment to and respect for sexual minorities. Similar acts have come from other countries beyond the European Union, such as Norway, which is a major donor to Polish civil society and development funds. This September, the Norwegian Foreign Ministry stated clearly that their country’s funds would be withdrawn from LGBT-free zones. The economic cost of this aid withdrawal could be devastating. For example, one of Poland’s most economically underprivileged towns, Kraśnik, will likely lose 10 million EUR.

European and international actors can certainly make a difference, but they should be mindful of the Polish government’s likely response. In particular, actions in support of LGBTQI+ rights may have the unintended consequence of fueling greater anti-EU and anti-foreign rhetoric by PiS leadership.

Thus, while international actors can attempt to discourage the current government from further scapegoating the LGBTQI+ community and limiting human rights, the best way internationals can promote sustainable political and social change is to lend their moral and financial support to domestic activists within Poland who are eager to defend rights and people in their country. As we have seen in Poland since October and in response to the government’s restrictive abortion measures, Polish citizens are regularly protesting in the streets in historic numbers (as they did during the Communist period) against government policies. Only continued international pressure for universal human rights, grounded in the Polish context, will allow domestic activists to continue waving their rainbow flags—regardless of what local authorities may say.

Patrice C. McMahon is a Professor of Political Science at the University of Nebraska-Lincoln. She is also the Director of the University Honors Program and Dean’s Professor of Teaching and Learning. She is the author most recently of  The NGO Game: Post-Conflict Peacebuilding in the Balkans and Beyond (Cornell University Press, 2017).

Łukasz W. Niparko is a human rights advocate (LL.M. in international human rights law from the European University Viadrina) and a Research Assistant at the University of Nebraska-Lincoln. He is an alumnus of the United World College (UWC-USA) and St. Lawrence University.