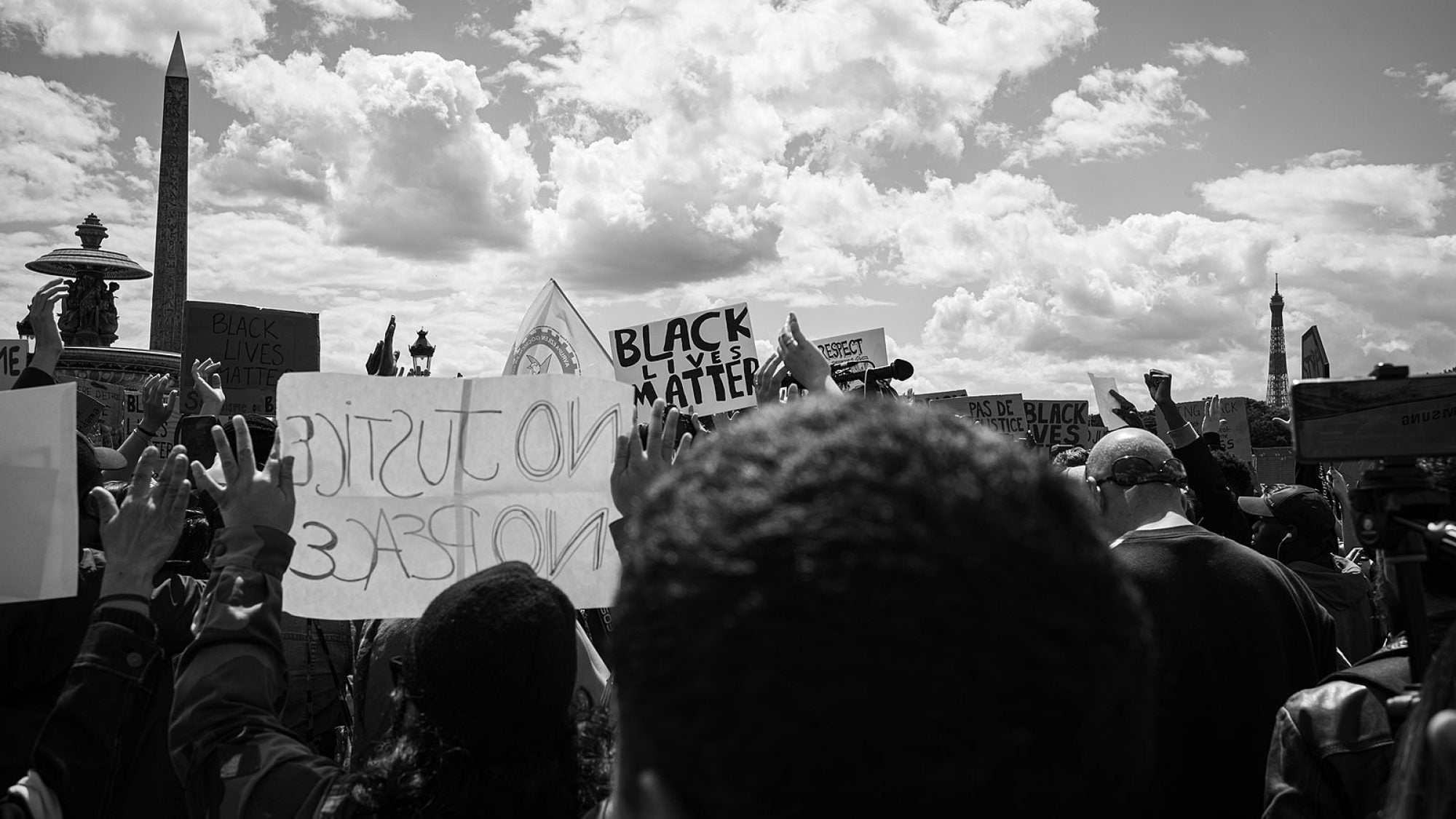 Recent events in France have revealed how race remains such a loaded concept in French society. But policymakers must emphasize that this is nothing new, and that public policies need to address historical and present racism in France in order to move forward.

Events in recent months have once again made race and racism part of public debate in France. There was the beheading of school teacher Samuel Paty in a banlieue, or suburban outskirt, north of Paris in October 2020 . Then the beating, captured on video, of Michel Zecler, a forty-one-year-old Black music producer, by four police officers last November in Paris. These debates have even included accusations of importing Anglo-American or US conceptions of race and racism to the French context, as evident in a recent interview  with President Emmanuel Macron in the New York Times and movement by his administration to investigate French universities for importing American theories. This is in addition to a proposed bill making it a criminal offense to share images of police officers on social media platforms, amid a growing mobilization against police violence targeting Black and Maghrébin-origin individuals.

These incidents, as well as the experiences of Black and Maghrebin-origin individuals, reveal the salience of race and racism in France. Yet race remains a taboo to discuss in France, not because it does not exist, but rather because the French state acts as if it does not. Research has demonstrated that France is more similar to the United States than perhaps commonly thought, as differences based on race and ethnicity are simultaneously acknowledged and denied in both contexts.

In remarks following Paty’s beheading, President Macron remarked that Paty was killed for “embodying the French republic.” This echoes the discourse following the 2015 massacre at the Charlie Hebdo editorial offices when “Je suis Charlie” became a relaying cry, yet Muslim individuals, whom were often caricatured in the satirical magazine, felt excluded from this motto. France is both “anti-racial,” in that the French reject the use of racial terms,[1] and “non-racial,” in that it denies the reality of race.[2] What is clear is how race has been instrumental in defining French identity, both historically and in the present. France should recognize this and institute educational and institutional reforms to correct this systematic issue.

Despite the extent of French colonial rule in parts of Africa, Asia, and the Caribbean, such a colonial history is minimized in the post-colonial period as anxieties about the presence of immigrants from these former colonies, growing multiculturalism, and Islam in France intensify. The ethos put forth celebrates the values of “liberté, égalité, et fraternité,” and the idea that all individuals are seen and treated equally as French so long as they ascribe to French Republican values. This is an assimilationist framework in which individuals relate to the state as individuals and not as members of identity groups.[3] The ideology of French Republicanism negates race and ethnicity as viable categories, such that France does not measure them. Demographic characteristics are framed based on immigration and citizenship status, rather than racial and ethnic group membership. Part of French racial discourse is actually not even using the word “race” in government documents. And as French scholar Mame-Fatou Niang remarks, there is no French word for “blackness.” Despite French Republican ideology which denies race as salient, it nonetheless structures boundaries of inclusion and exclusion. Research on racial and ethnic minorities, especially those descended from former French colonies, reveals how they are often excluded from full societal belonging, as well as the boundaries around who a French person is, or can be.

The differences between race and racism in France versus the United States relates to each society’s different history of colonialism, and legacies thereof—not one more severe than the other—but rather how each society invokes this history in its national ethos or narrative. The United States, being a “nation of immigrants,” also relies on a narrative of forward racial progress, in the sense that while the United States has a long history of slavery and legalized racial discrimination, such a history is rarely invoked to make sense of present-day dynamics of racism and racial inequality. This is evident, for example, in the current debate on reparations for African Americans or the celebration of Barack Obama as the first Black US president as a cumulation of previous civil rights struggles.[4] In France, Republicanism has long been praised as a better alternative to identity politics in the US in terms of creating a national cohesiveness and community. Acknowledging difference based on race is seen to propagate such differences. Therefore, the French often characterize the United States, with its emphasis on multiculturalism and diversity, as an example of the dangers that can occur when race and ethnicity are officially measured and marked in society. Invocations of racism in France bring accusations of importing US frameworks.

When discussing race is disavowed or discouraged, there is no easy discourse available to make claims about the perpetuation of racism at an individual or institutional level.[5] Racism in France is therefore simultaneously omnipresent yet continually suppressed. And because of French Republicanism, race is also forever taboo to discuss. This is part and parcel of global white supremacy, so that anti-racist efforts outside of France, including in the United States, influence anti-racism within France, and vice versa.

The French government should consider a mechanism to collect ethnic statistics on the multicultural nature of its population. Part of the difficulty in addressing racism and racial discrimination in France is the lack of comprehensive data as to the extent of these social problems. One of the policy gains from the US Civil Rights Movement was the change in a legal framework to address race and ethnicity, including, for example, the 1964 Civil Rights Act and the creation of the Equal Employment Opportunity Commission. Anti-discrimination policies in France that do not acknowledge race as a category will continue to be insufficient. Race is explicitly neglected in French policy for fear that acknowledging its existence reifies inequality and division, yet it is clear that this has not worked.

Moreover, France needs to acknowledge and affirm the place of its minority populations. Increased representation of racial and ethnic minorities in government, arts, and entertainment will further make visible minority populations in mainstream French society. For example, we can point to former Minister of Justice Christiane Taubira, who was born in the overseas department of French Guiana, yet at the same time, we cannot miss the racist attacks she suffered as her stature rose in national politics.

As Islamophobia is often intertwined with racism, it is also crucial for the French government to further address specific forms of Islamophobia and work towards including and incorporating its Muslim citizens as part of French society. Relatedly, the French government must take seriously the normalization of police harassment and identity checks by the police which can lead to deaths. The Gilets Jaunes, or Yellow Vests movement has increased the visibility of police harassment and violence through their demonstrations. But this violence is a long-standing problem, particularly targeting Black and Maghrebin populations.

Further education on France’s history of colonialism will serve to include non-white individuals into the narrative of French identity. In sum, public policy should address marginalization and discrimination based on race and ethnic origin, not just based on socioeconomic status or class. Without measures such as these and a reckoning with its colonial history, including official apologies to former colonies, and the ways that French Republicanism disavows race, France will remain in this non-racial and anti-racial stasis.

[2] Russell, S. Garnett, and Prudence L. Carter. 2019. “When the past is in the present: The paradox of educational opportunity and social inclusion in South Africa and Rwanda.” Sociology of Race and Ethnicity 5(4): 547-561.

Jean Beaman is an Associate Professor of Sociology at University of California, Santa Barbara. Her research is ethnographic in nature and focuses on race/ethnicity, racism, international migration, and state-sponsored violence in both France and the United States. She is author of Citizen Outsider: Children of North African Immigrants in France (University of California Press, 2017). Her current book project is on suspect citizenship and belonging, anti-racist mobilization, and activism against police violence in France.