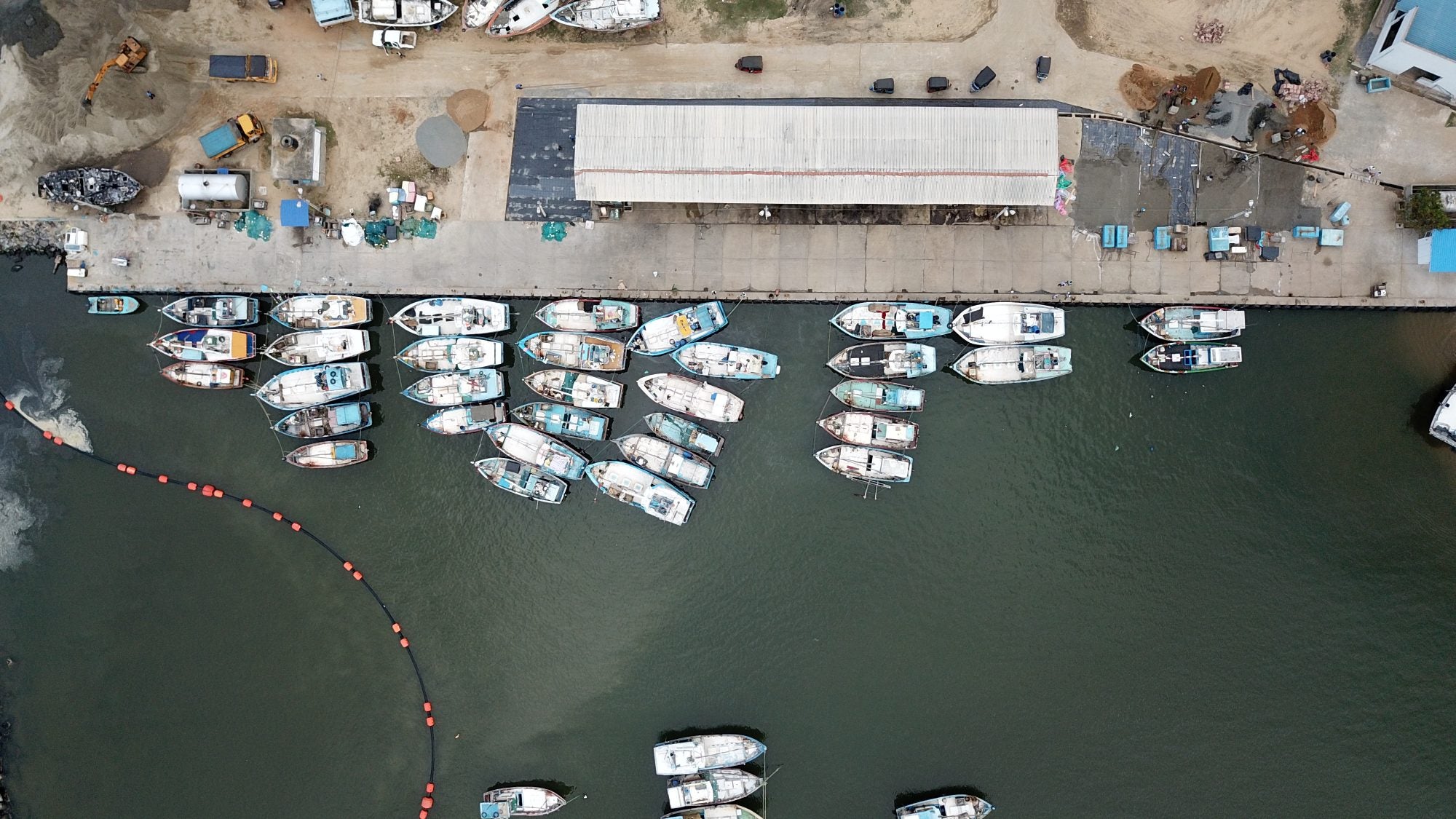 The case of the ninety-nine-year lease of Hambantota Port to China has become the example par excellence of Chinese debt-trap diplomacy. While China’s influence over Sri Lanka has increased in the past decade, this narrative of debt-trap diplomacy is unwarranted for three primary reasons: (1) the Concessional Agreement was not a debt/equity swap arrangement; (2) Sri Lanka’s own government actively solicited the project; and (3) the percentage of Sri Lankan debt owed to China remains a mere fraction of its overall sovereign debt.

The lease of Hambantota Port to China has become the most oft-used example of China’s debt-trap diplomacy. It has also become a cautionary tale for countries that have joined—or are considering joining—the Belt and Road Initiative (BRI) about potential side effects of receiving Chinese money. The ninety-nine-year Concessional Agreement was signed in 2017 between the Sri Lanka Ministry of Ports and Shipping, the Sri Lanka Ports Authority (SLPA), and CMPort. The Agreement set up two separate joint-venture companies to oversee the port’s commercial and security operations: The Hambantota International Port Group (HIPG) and Hambantota International Port Services (HIPS). These companies are de facto auxiliaries of CMPort, which retains an eighty-five percent share of HIPG and a fifty-eight percent share of HIPS, with SLPA retaining the remainder of both companies as a de facto minority shareholder. According to the Agreement, CMPort leased the Hambantota Port for ninety-nine years and invested up to U.S. $1.12 billion in the port, as well as other marine-related activities in connection to the port, for a total area of 15,000 acres of land. The Agreement has not been made available to the public, but CMPort has published some excerpts of it online.

The Initial Concessional Agreement has been depicted by media as part of a Chinese attempt to burden countries under heavy debt and seize them of their strategic assets. The BRI, according to this narrative, comprises part of a grand scheme that creates new dependencies by leveraging Chinese economic gains and bending recipient countries’ sovereignty and will. The Hambantota Port, strategically located in the Indian Ocean and an essential part of the Maritime Silk Road, is also viewed as part of China’s “string of pearls” geopolitical strategy to develop port projects in Pakistan, Bangladesh, the Maldives, and Myanmar to encircle India and secure essential trade routes and energy supply that do not depend solely on the Malacca Strait. However, the case of the Hambantota lease remains ensconced by many myths that, only recently, media and academic literature have started to debunk. Three reasons show how the narrative of debt-trap diplomacy is inappropriate: the lack of a debt/equity arrangement, the Sri Lankan government’s solicitation of the loan, and the minimal amount of Sri Lankan debt owed to China.

The China debt-trap narrative of Hambantota Port was primarily premised upon the idea that the concessional Agreement was a debt/equity arrangement, wherein a company’s debts are exchanged for stock or equity. However, according to new official statements, the Agreement was not a debt/equity swap arrangement where Sri Lanka leased the territory for ninety-nine years to China as a way to pay off its debt. In 2019, Sri Lankan officials declared that the loan agreements for the port owed by the Sri Lankan government to China were separate from the Concessional Agreement of the port. It was declared that the debt owed to China for the construction of the port was simply transferred out of the books of the Sri Lanka Port Authority and taken over by the Sri Lankan Treasury.

It is also important to note that the rights that CMPort has acquired through the Concessional Agreement do not conclusively give CMPort dominant authority over the port, as the territory—in theory—remains under Sri Lankan sovereignty. The rights tied to the lease’s objective include the “exclusive right to develop, operate and manage Hambantota Port” and, more specifically, “collecting revenues for all port and marine-related operations.” These rights align with the Sri Lankan government’s plans to develop the Hambantota Port according to the port-park-city model (前港-中区-后城) and transform the area into a bigger industrial project tied to the development of smart cities and the Digital Silk Road. While the port is managed by a “joint company,” CMPort retains control of board personnel and operating decisions. As the rights tied to the lease’s objectives are narrowly specified in the publicly available version of the Agreement, it remains unclear the extent to which the lease has control and jurisdiction over the territory of Hambantota Port.

Although the rights over the port are divided between CMPort and the Sri Lankan government, some have seen Chinese commercial development of an increasing number of ports around the world as a process of weaponization of the BRI. The ports, especially in light of dual-use technology, could provide logistical support to Chinese military operations as strategic strong points. This is a valid concern, but in the case of Sri Lanka, the government has provided reassurances that the final lease agreement forbids military activity without its invitation and that the Hambantota Port is under Sri Lankan sovereignty. The security concerns over a port commercially run by a Chinese company were dismissed by the Sri Lankan government, which also moved its southern naval command to the facility. Moreover, it is important to acknowledge that China is not a monolith. The stakeholders are manifold and have different incentives, and there is often a lack of the Chinese central government’s control over its economic actors abroad. Because Chinese economic actors seem driven by economic goals, it appears that Beijing doesn’t have a military or political strategy over Hambantota.

Furthermore, the Sri Lankan government itself sought out loans for the port and benefits from its development. Prime Minister Rajapaksa and other officials after him declared that the development of Hambantota was not a Chinese proposal but rather a request from the Sri Lankan government. Sri Lanka had initially approached the United States and India, who both refused, citing economic viability concerns confirmed by feasibility studies. The development of the port comprised part of Rajapaksa’s  “Mahinda Chinthana Idiri Dakma” (Mahinda Rajapaksa: Vision for the Future), launched in 2010 during his sixth presidential election campaign. In this sense, it is hard to justify the idea that China actively plotted to put Sri Lanka into a debt trap. If this were the case, there would be more examples of debt-trap diplomacy, but research has shown that, in cases of debt insolvency or repayment difficulties, China has largely re-negotiated its deals. If the concessional loan with Sri Lanka is not debt/equity swap, then there would be essentially no instances of China taking assets as a way to write off debt, and the debt-trap rhetoric of would have no basis.

Although the Agreement didn’t include a debt/equity swap and the Sri Lankan government achieved its goals, there are still issues of China’s predatory behavior, debt sustainability, and economic viability and returns on the Hambantota port project. However, Sri Lanka’s debt vulnerability preceded and was unconnected to Chinese lending, casting doubt on the idea that China purposefully created Sri Lanka’s debt problem. The problem is the consequence of excessive borrowing from Western-dominated capital markets and Sri Lanka’s structural economic problems. In 2017, Sri Lanka’s total external debt used to finance the ambitious infrastructure projects envisioned by Prime Minister Mahinda Rajapaksa was already 51.824 billion USD, among which outstanding Chinese loans accounted for 10.6 percent or 5.5 billion USD. Today, this continues to be the case. In 2019, Sri Lanka’s external debt represented 42.6 percent of its GDP, but only around ten percent of this debt, or 3.39 billion USD, is owed to China. When the Concessional Agreement was signed, Sri Lanka’s debts primarily resulted from the government of then-President Mahinda Rajapaksa and its economically non-viable development plan for the country (2005-2015). Economic miscalculations by China’s state-owned enterprises in various other white elephant projects in the country also contributed to debt crises but did not constitute the primary cause.

Ultimately, the narrative of debt-trap diplomacy is inappropriate for the Hambantota Port, and the port’s development deserves to be analyzed in its own merits. In the past few years, the Hambantota Port has become fully operational as an energy hub and won the Global Ports Forum Awards 2020. Despite COVID-19, the port saw an increase in the numbers of transshipments and, in 2019, it reached its 1 million MT benchmark. Meanwhile, Sri Lankan residents took advantage of career and training opportunities provided by the Sri Lanka government and CMPort. Four years ago, the Hambantota Chamber—in partnership with HIPG and with support from the Chinese Embassy—started a Chinese language training program for Hambantota residents. According to HIPG General Manager Human Resources Jeevan Premasara, ninety-seven percent of the staff at the port are Sri Lankans, and sixty-seven percent are recruited from Hambantota and surrounding districts. There are also plans to further develop export-oriented manufacturing in light of the port-park-city model. Despite the impressive progress of the Hambantota Port and the projected increase in Sri Lankas’s oil export earning, the numbers are still far from the 2016 SLPA aspirations for Sri Lanka to become the center of maritime excellence, which include the achievement of 200 million tonnages in cargo handling, and the generation of one billion US in revenue by 2020.

Overall, I do not see China plotting an instance of debt-trap diplomacy; if one really wants to go that route, one should use a different example than Hambantota. It is not in China’s own interests to place countries in debt distress, especially as it now aims to be a global leader and thereby faces increased scrutiny over its actions abroad. Particularly in light of the global mounting debt precipitated by the pandemic, debt sustainability remains a big issue, not only for recipient countries but also for China itself, which has emerged as the main—and often the only—source of bilateral development finance of many countries. The BRI represents a continuation of China’s “going global” strategy that started two decades ago. China is still learning. While it has financed various white elephant projects that were not economically and financially viable, it has successfully improved its standards for its investments abroad and has become more careful in disbursing loans. That said, recipient countries should be more careful with Chinese money and know that they have leverage in negotiations despite being less powerful than China.

The rhetoric of debt-trap diplomacy diverts attention from other questions such as how China is actually transforming its rising power into influence and whether Chinese investments along the BRI actually improve a host country’s economy and the lives of its people. These studies are nascent, but the complex nature and comprehensive scope of the BRI and China’s influence and reach should not be reduced to one single element—be it economic, military, cultural, or geopolitical. Chinese influence in Sri Lanka, and in other countries, should be examined and analyzed through a broader prism, one that accounts for the recipient country’s own agency in shaping China’s influence, the actual effects on the lives of their people, and the broader impact of global transport infrastructures on value creation.