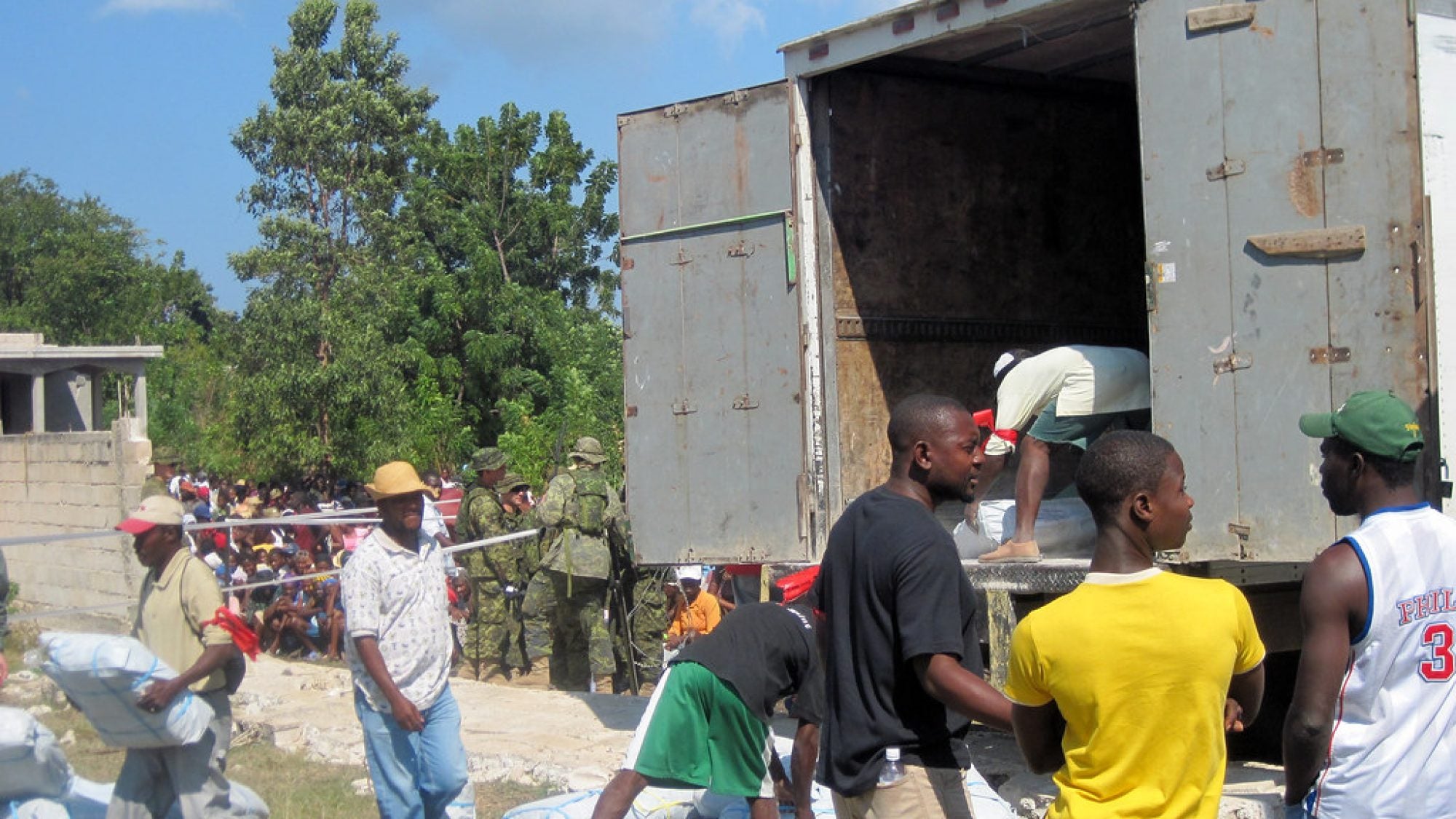 Title: Understanding Haiti Through the Power of the Social Forces in Interaction

In the current context of intellectual struggle and global activism against systemic and institutional racism, the international community should be aware that Haiti’s victimization through racialized capitalism harms the daily lives of Haitians both inside and outside Haiti. Political theories that portray Haiti as a fragile or failed state are inaccurate since they do not provide a sufficient account of the power of international and local forces that constantly shape the contours of Haitian society. The international community must come to understand that Haiti is part of that community of nations, and it must abandon its foreign policy of tutelage in the first antislavery Republic.

When studying the Haitian state and its institutions, scholars and policymakers often unwittingly employ standard neo-colonial tropes developed through the lens of racialized capitalism. Supporters of the fragile or failed-state idea look at poor institutional outcomes, arguing that political corruption, crime, and rampant poverty are direct consequences of the absence of a Leviathan able to both exercise legitimate physical force and provide governmental social services. Such researchers customarily resort to the “culture argument,” which usually borders on racist essentialism. Often the very phrasing of the researcher’s question reveals preconceptions about the country. William Zartman, then Director of the Conflict Management and African Studies Program at Johns Hopkins University, went to Haiti in January 2007 to find out “how to explain the endemic conflict in Haiti,” and the tenor of his final report could have been anticipated. It did not offer explanations but instead the dry conclusion that “Haiti is a place where institutions, economy, security, infrastructure, state, and legitimacy have collapsed, the eighth worst country in the Failed States Index…”[i]

The problem with this approach lies in its inability to explain the failure and fragility of the Haitian state within the context of the multiple imbricated relations between local social forces (such as state officials, political opposition, and oligarchs of the private sector, all devoid of projects to improve people’s lives) and powerful transnational forces. Through an analysis of Joel S. Migdal’s state-in-society perspective, the moral responsibility of the international community in the production of insecurity and state-sponsored violence in Haiti can be determined. In light of this, the United States must reject its foreign policy based uniquely on instrumental rationality and adopt one that respects Haitian sovereignty.

Migdal’s state-in-society perspective, which has been noticeably absent in the specialized literature on politics and society in Haiti, is essential for a better understanding of the current disrepair in both the Haitian state and society. For Migdal, states are never entities that enjoy complete autonomy; different interest groups are seeking constantly to impose their influence or domination over state officials.

In one of his edited books, Migdal asks two particularly relevant questions:

1) When and how have states been able to establish broad political authority?

2) When and how have states established economic agendas for their societies– to appropriate resources and shape patterns of investments, production, distribution, and consumption?

These questions are meaningful since they allow us to address Haiti’s structural problems while avoiding ahistorical analyses when considering the negative impacts of foreign policies designed by the global north and imposed on nations of the global south. The first question offers an understanding of the influences of alien social forces, which have compromised Haiti’s sovereignty since its inception. Migdal’s questions help determine the moral responsibility of the international community in producing insecurity and state-sponsored violence in Haiti. Illustrative of this point, US Congressman Gregory Meeks recently quipped, “The guns that are killing people in Haiti came from the United States. We have to stop the flow of guns to Haiti.”

In the case of Haiti, Migdal’s perspective is insightful and allows for apprehending the state as an open arena caught by a myriad of both international and national political forces whose agendas do not coincide with the promotion of the good life of the Haitian population. Thus, his approach makes possible a comprehensive and decolonial interpretation of Haiti’s current problems—which are connected both to the country’s past and the position it has occupied among modern nation-states since its emergence in 1804—within a broader context of racialized capitalism.

Haiti, Africa’s oldest daughter, championed the universalization of human rights early in its history. Haïti chérie, as Haitians are wont to call her, opened the gate for the construction of decent, modern nation-states beyond racial division. The 1804 Act of Independence of Hayti and the 1805 Constitution challenged racialized capitalism and the idea associated black with barbarism and white with civilization. Despite such achievements, Haiti has customarily been ill-treated by the international community. From the country’s birth to today, powerful transnational social forces have sabotaged Haiti’s development.

Since Haitian independence, the West, using a combination of diplomacy, coercion, and ‘machtpolitik,’[ii] has disciplined Haiti for upsetting the ontological foundation of Western modernity. For example, France in 1825 coerced Haiti to pay $20 billion reparations for property loss. This multigenerational debt robbed Haiti of much-needed development capital, which has contributed enormously to the country’s chronic economic woes. A more recent example of the country’s abuse at the hands of powerful Western states was the February 2004 coup d’état engineered by Washington and Paris, overthrowing the democratically elected President Jean-Bertrand Aristide. One of the main reasons for this coup was Aristide’s discursive request to France to repay Haiti the monies it paid for its independence (the reparations).

Since 1825,  the hallmarks of relations between Haiti and France, Germany, and the United States have been a series of foreign interventions, political interference and tutelage, noxious Western policies targeting the county, strategic alliances among those Western powers, and corrupted Haitian politicians from the US Occupation of Haiti (1915-1934) until today.

Alliances between Transnational and Local Social Forces in Haiti

For Migdal, the state is an expression of the polymorphic and reticular relations between its social forces. Accordingly, in the case of Haiti, local social forces have been at the forefront of the historical actions that have led to the disarticulation of state institutions. Institutions are not exterior or disconnected from society but embedded within the state. Accordingly, Haiti’s powerful oligarchy plays a central role in this process. Well-connected locally and internationally, that oligarchy has been actively engaged in well-articulated political and strategic alliances. In their deadly struggles to maintain political power, they finance the campaigns of usually noir politicians; the idea is to show the black masses, le peuple, that their leaders look like them.

The historical politics of doublure, predicated on class and color manipulation, have allowed these oligarchs profitable returns on their political machinations. The black-skinned president provides the light-skinned oligarchs various business opportunities with the state. Oligarchs pay no taxes, enjoy customs duties exemptions, and sign government contracts that allow them much leeway to overbill or underbill at their discretion. Thus, oligarchs have been able to establish a system of domination anchored in patronage and grift, “the politics of the belly.” Consequently, the Haitian state may well have collapsed for the Haitian people, but it remains a healthy and vigorous entity for the dinosaurs of the private business sector, who are locally and internationally well-connected.

Identifying the shortcomings of failed states theories in diagnosing Haiti’s historical and structural damages requires using the social forces approach, which is much better for understanding the complex networks of relations and strategic alliances between internal and external social forces that have shaped the institutional matrix of the Haitian state. The international community’s traditional foreign policies toward Haiti is also criticized in this article. We suggest that it is not too late to fix the untenable situation in Haiti. During his Presidential inauguration, Joe Biden recognized that democracy, although precious, is a fragile experiment requiring constant vigilance from the civil society. This is Haiti’s continuing predicament. The international community, particularly the United States, has work to do. It is an opportune moment for the United States to play its part by abandoning foreign policy based uniquely on instrumental rationality and embracing a humanitarian approach toward the Haitian people. This requires the United States to stop the flow of guns to state-sponsored gangs, who take the lives of innocent Haitians. Furthermore, many private sector oligarchs doing business in Haiti, are in reality, foreign citizens, including US. citizens who are well-connected with transnational social forces. A political change in Washington can do a lot to reverse Haiti’s current state-supported lawlessness. This is the time for the international community and Haiti’s oligarchy to listen to the progressive Haitian social forces (politicians and civil society) desire to establish healthy and respectful relations with the international community.

Jean Eddy Saint Paul is a professor of sociology at Brooklyn College of the City University of New York, where he was the founding director of the CUNY Haitian Studies Institute. He previously was a visiting scholar at the Institute of Political Science (Sciences Po) in Paris, France, and served on the Faculty of the Division of Law, Politics and Government at the Universidad de Guanajuato (Mexico), where he cofounded the PhD program in Law, Politics and Government. Email  jeaneddy.saintpaul@brooklyn.cuny.edu.