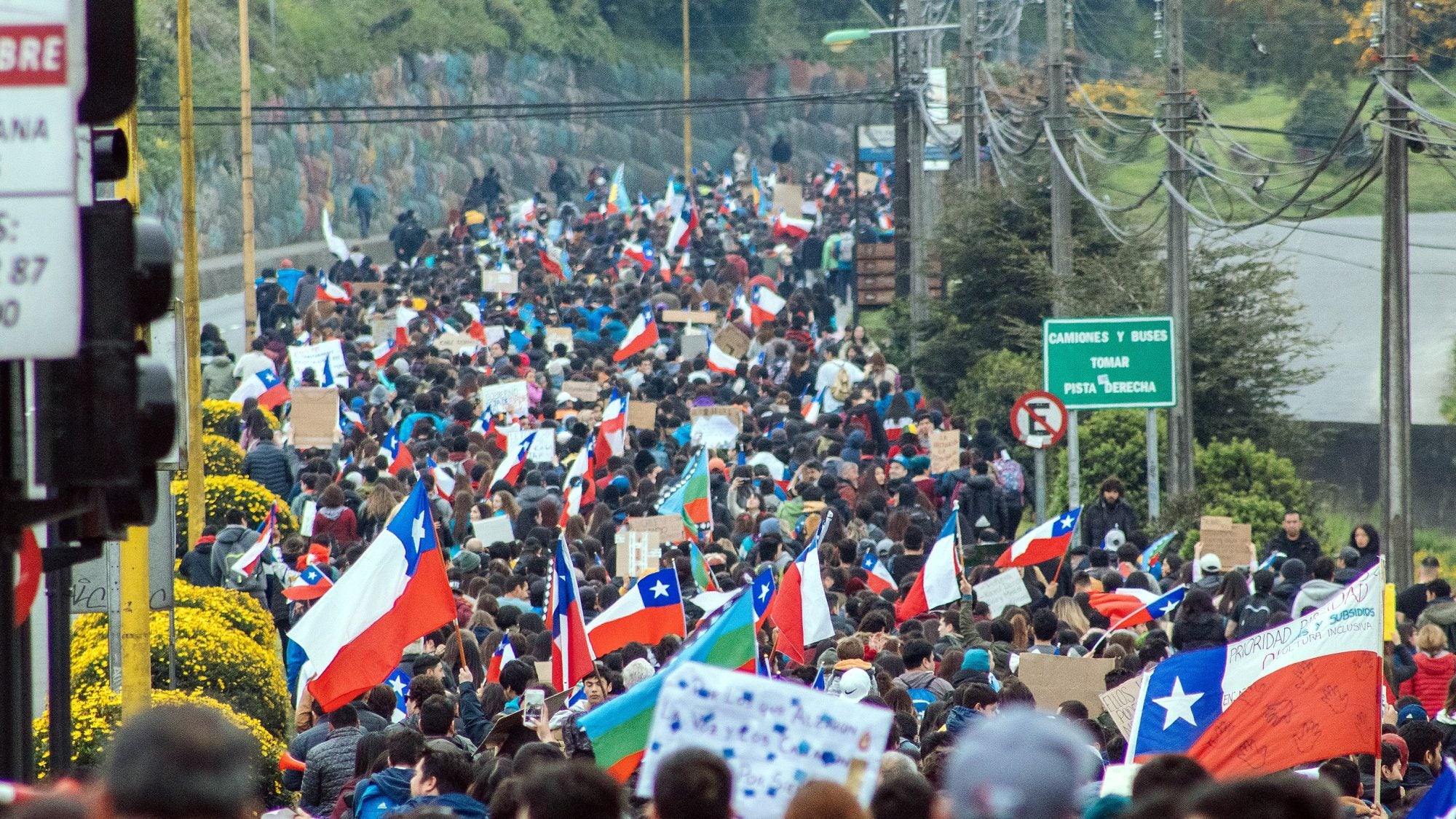 Since the 1990s, social protests have spread around the world, helping to consolidate fledgling new democratic governments and advance much-needed economic and political reforms. These protests have also destabilized weak democracies and usurped the role of more routine forms of political engagement. Protests should continue to strengthen parties and elections in weakly institutionalized democracies and to hold governments accountable, but stop short of becoming the main tactic through which political disagreement is expressed.

From 1974 to 1994, the world experienced an unprecedented wave of liberalization, referred to by political scientists as the Third Wave of democratization. For the first time in world history, there were more democracies than autocracies in the world. Since the mid-1970s, new democracies have made progress on many fronts, including democratic consolidation. Developing democracies that have consolidated include those in Southern Europe (Portugal, Spain, and Greece), Uruguay, Chile, South Korea, Taiwan, and, before their recent backslide, Poland and Hungary. However, the third wave of autocratization, which began in Russia, Belarus, and Armenia in 1994, has partially reversed these gains. Among countries that remain democratic, moreover, progress has been uneven. Initially, economic reforms and the opposition they generated threatened the viability of new democratic governments. New democracies also confronted widespread corruption, institutional weakness, and, since 2001, a world with more autocracies than democracies. In subsequent years, democracies outnumbered autocracies once again but by 2020, the pendulum had swung back in the authoritarian direction. This article will review the challenges to governance new democracies have faced and how citizens have reacted to these challenges, with particular emphasis on how these processes have played out in Latin America.

Democracy arrived in much of the developing world accompanied by neoliberal structural adjustment programs sometimes implemented at the behest of international financial institutions like the World Bank and the International Monetary Fund. In the 1980s, the concern was that economic reforms were “atomizing” and demobilizing citizens, thus causing them to lose connection with collective actors such as labor unions and civil society organizations. This gave way in the 1990s to accounts that social protests were occurring with greater frequency and intensity. From 1989 to 2002, for example, massive demonstrations against neoliberal programs ushered in new governments in Argentina and Venezuela. In Ecuador and Bolivia, protests precipitated premature presidential transitions.

In Chile, participation in protests was relatively low until 2010, with most citizens participating in conventional forms of politics. From 2011 to 2013, however, students mobilized against the privatization of secondary and post-secondary education. This social movement, which came to be known as the “Chilean Winter” in reference to the massive protests of August 2011, prompted the government to subsidize interest rates on student loans and to undertake educational, tax, and constitutional reforms. In Argentina, Bolivia, Colombia, Paraguay, and Peru, moreover, protests have become so entwined with the political process that these democracies have been labeled “protest states”.

In October of 2019 Chile’s government increased the price of subway rides in Santiago, prompting massive demonstrations, severe rioting, and the first state of emergency since democracy was restored in 1990. What began as protests against a particular policy in the country’s capital quickly morphed into a social movement (“The Social Outbreak”) against a neoliberal policy regime generating deep inequalities, a high cost of living, and insufficient social insurance. Chile has the highest income gap in the Organization for Economic Cooperation and Development (OECD). The political system is highly elitist and technocratic, with citizens having few opportunities to make their voices heard between elections. The months-long upsurge culminated in a plebiscite in 2020 to draft a new constitution. The “Approve” side won by a landslide with a supermajority also opting for a constitutional assembly to rewrite the country’s 1980 Constitution inherited from the military regime.

Even before the peak in mass mobilization in 2019, social protests were realigning politics around the world with citizens making their voices heard and demanding political and economic reforms. Civil society organizations have also played a major role in strengthening democratic governance. Scholars have noted how non-governmental organizations (or NGOs) spur protests in countries with weak democracies. NGOs in countries with high-quality institutions typically work to increase voter turnout. In countries where parties do not offer clear programmatic alternatives, elections are not fair, and voters lack confidence in the electoral process, however, NGOs mobilize citizens to use protest as a tool to place additional demands on the political system.

But there is a dark undertone to social protest when mobilizational campaigns result in the irregular removal of legitimate governments. Brazil, known as one of the “quietest” countries in Latin America, removed President Dilma Rousseff in 2016 after protesters called for her impeachment alleging corruption when she was chair of the board of directors of Petrobras, the state-owned Brazilian oil company. Rousseff did not have to answer for those charges, but she was tried by the Brazilian Senate for charges stemming from questionable allegations of increased public spending without authorization from Congress. More worrisome still, Latin America has returned to a level of democracy last recorded in 1992, with backsliding in Bolivia, Nicaragua, and Venezuela.[i] Meanwhile, some democracies remain unstable because their judiciaries do not protect citizens and other branches of government from executive overreach. Examples include Nicaragua under President Ortega (2007-) and Brazil before the Supreme Court stepped in to check President Bolsonaro’s excesses.

The late Argentine political scientist Guillermo O’Donnell once referred to the phenomenon of democracy with powerful presidents as “delegative democracy”: a system in which executives rule as they see fit, even if their policies betray the promises they made while running for office. Latin America in the post-transition era experienced this phenomenon, but executive domination in new democracies has become more prevalent recently as some countries experienced autocratic backsliding and managed to reverse it (Ecuador and South Korea), while others became electoral autocracies altogether (Bolivia, Hungary, and Turkey). Protesters deposing President Evo Morales with the help of the military after reports of voting irregularities (November 2019) did not prevent Bolivia from sliding into the autocratic camp.

Meanwhile, in Ecuador from 2007 to 2017, “[g]rassroots movements in favor of democracy played a decisive role in reversing the autocratization process initiated under former President Rafael Correa”, forcing him to abandon his plans to stand for reelection. These trends of sociopolitical mobilization in response to democratic backsliding are also present outside of Latin America. In 2016, in response to allegations of corruption by South Korea’s President Park Geun-Hye, South Koreans began a series of peaceful weekly rallies around the country’s major cities to demand her resignation or impeachment. The protests, which came to be known as the Candlelight Struggle or the Candlelight Revolution, quickly snowballed in size, leading to the impeachment and removal of the president from office, an unprecedented step in South Korean republican history, and a move that was upheld by the country’s Constitutional Court.

In 2019, pro-democracy mass mobilization reached an all-time high with protesters in democracies resisting the dismantling of democracy and their counterparts in autocracies demanding more democracy. With the outbreak and spread of the COVID-19 pandemic, the ability of individuals to freely associate has been severely tested, but a return to pre-pandemic conditions will most likely see struggles for inclusion and accountability re-emerge in the world’s democracies. In the new millennium, new technologies that have made the costs of assembly and organization plummet have changed the dynamics of activism and protest. While “the presence of social media can increase the size, frequency, and international visibility of protests,” the ability of social movements to contribute to the quality of democracy depends on a movement’s ability to engender collective decision making, plan strategically for the long-term, and maintain tactical flexibility and cohesion.

Actors in the international arena such as NGOs and International Organizations should work to strengthen the capacities of social movements not just to mobilize citizens, but also to create long-term, purposeful, and non-violent campaigns that can bring about structural changes to a country’s politics and economics. The goal of movements, in other words, should be to catalyze reforms that go beyond the injustices of the day. To do this effectively, organizing that is strategic, coordinated, inclusive, and peaceful is imperative. Research shows that non-violent resistance (NVR) campaigns promote democracy compared with violent uprisings, and NVRs also improve the quality of democracy by facilitating the free association and expression of citizens.

There is also evidence that the size and unity of opposition parties matters for anti-government protests in new democracies. Consequently, the international community can support developing democracies by increasing the strength and cohesion of oppositional political parties when these parties behave lawfully. Furthermore, if judicial independence can be strengthened, then those who oppose a government stand a better chance not only of redressing their immediate grievances but also of catalyzing substantive reforms to the status quo. Actors in the international sphere can support this goal by reminding leaders that judicial independence is crucial for attracting investment (both foreign and domestic), which generates economic growth. As independent courts uphold property rights and enforce contracts, leaders benefit indirectly from their existence. Allying with actors in the political process such as the judiciary can bring about long-term benefits.

In sum, this article has taken stock of the role protest movements have played in defending and deepening democracy since the Third Wave of democratization began in 1974. The world of democracies has expanded and contracted in the past four and half decades and protest movements have sometimes tracked with these fluctuations. It is clear that in some cases, democratic forces have used social protests to strengthen and deepen the quality of democracy. In other cases, they have resisted pressures to turn the clock back, with both successful and unsuccessful results.

[i] This information comes to us from the “Varieties of Democracy” project, an award-winning, global effort to catalog and compare regime characteristics around the world.