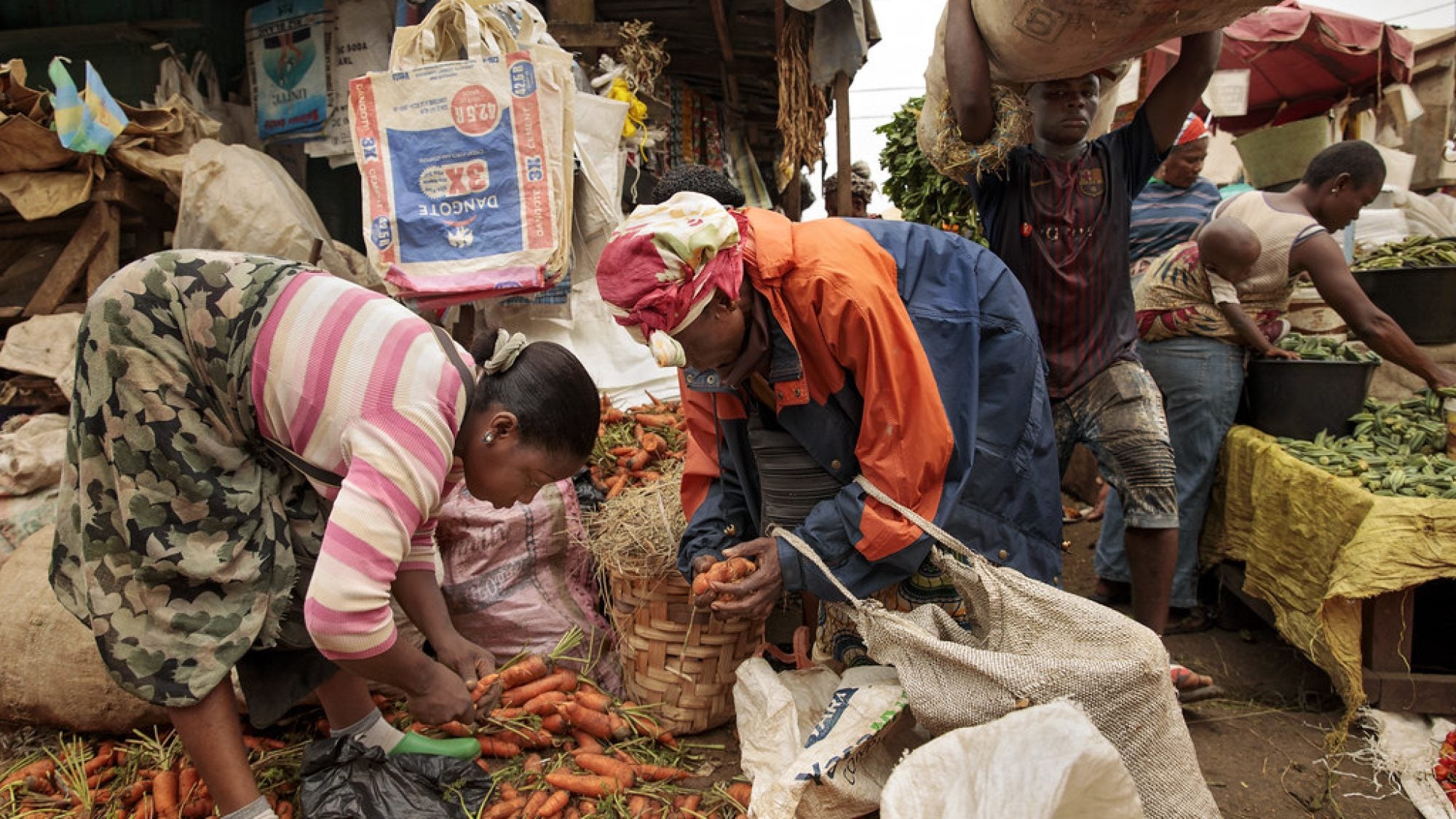 Title: The State of the Informal Economy in Africa During the COVID-19 Pandemic

The informal economy makes up a significant proportion of the worldwide economy, especially in emerging markets and developing countries. The COVID-19 pandemic exacerbated the hardships faced by workers in the informal economy in Africa due to the disproportionate effects of protective pandemic measures on informal workers. The pandemic is a wake-up call for African governments to bring informal economy operators to the drawing table. Ignoring them will subject a large proportion of workers to shocks that will negatively impact the overall development of African countries.

In many African countries, 80 to 90 percent of people work in the informal economy. According to the International Labour Organization, the informal economy refers to all economic activities, except illicit activities, by workers and economic units that are, in law or in practice, either not covered or insufficiently covered by formal arrangements. Africa’s informal economy consists of indigenous markets that have survived colonial and post-colonial modernization projects. These markets are characterized by solidarity entrepreneurship and driven by the logic of everyday survival and community thriving. The informal economy includes most household domestic workers, street vendors, waste collectors, and hawkers, among others. Informal workers may be self-employed or wage employees without formal contracts or social protection from their employers. In Africa, about 90 percent of employed women are in informal employment. Women make up over 80 percent of the 1.3 million market traders and street vendors in Ghana’s urban areas. In the same country, 75 percent of the more than 870,000 home-based workers are women. Three-quarters of private household workers in South Africa’s eight major metropolitan areas are women.

Since workers in the informal sector often have meager incomes, little or no job security, and no pensions, insurance, or health insurance, the COVID-19 pandemic has had dire consequences for them. This article explores how protective measures such as social distancing, mask wearing, lockdowns and isolation, and handwashing have impacted informal workers and how African governments can address the issue.

The stringent physical distancing measures led to a dramatic decline in household demand for goods and services. Retail sales in South Africa decreased by two-thirds in the first two days of the country’s lockdown. In Nigeria, two-thirds of consumers reportedly cut back on their spending, resulting in lost income and closures for businesses. Lower demand and output, as well as stay-at-home directives, led to furloughs in the short-to-medium term and unemployment over the long-term as businesses laid off workers. The Ethiopian horticulture industry reportedly lost 11 million dollars, leading to the firing of 150,000 people in the first half of 2020. Lost income accentuated demand pressures, fueling a vicious cycle that plunged five million people in Nigeria, two million people in the Democratic Republic of the Congo, and about two million people in Kenya into absolute poverty. There are many testimonials affirming these statistics including from Margaret Raman, a grains seller at a local market in South Sudan, who lost more than 50 percent of her income as social distancing guidelines reduced the number of people visiting the market. Similarly, customers avoided crowded Gikomba, Kariokor, and Wakulima—the biggest informal markets in Nairobi, Kenya.

The closure of borders, particularly by Kenya’s trading partners in the East African Community, and in-country travel restrictions disrupted the informal sector supply chains by constraining production, marketing, and distribution of goods and services. Loss of income through unemployment, fear of contagion, and heightened uncertainty caused people to spend less, thus lowering aggregate demand. Reduced economic activity and consumption translated into negative movements on macroeconomic aggregates such as GDP, inflation, and unemployment rates. Sub-Saharan Africa was consequently projected to experience a GDP decline rate of 2.1 to 5.1 percent in 2020, with the contraction reaching as high as -6.9% in the three largest economies (Nigeria, South Africa, and Angola). Africa risked plunging into a recession, loss of tax revenues, budget deficits, and increasing public debt. Women running informal businesses suffered greatly. For example, female houseworkers were no longer regularly contracted for fear that on the way to work, they would come into contact with persons infected with COVID-19.

In the wake of the pandemic, demand for face masks in Africa outstripped availability and production. In Nigeria, the price of one face mask rose from 50 naira ($0.14) to 350 naira ($0.98), an increase of approximately 600 percent. In Kenya, the recommended N95 masks retailed at US$50 to US$90, way beyond the reach of ordinary informal sector workers’ wages. Ordinary face masks were still costly, retailing between US$5 and US$20. Out of desperation, some women used bras and underwear as face masks.

In response to public outcry, governments stepped in. The Moroccan government subsidized the price of face masks and sold them at a subsidized price of 0.8 dirhams ($0.08) per unit. This measure stimulated local production of masks and led to the production of three million masks per day. The Tunisian Health and Industry ministries committed to manufacturing approximately thirty million units of reusable face masks. The Kenyan Ministry of Industrialization called upon local industries in the country to assist in the production of masks, leading to the production of approximately 5,000 masks per day. Later, local small- and medium-sized enterprises seized this opportunity to produce textile face masks.

At the onset of the pandemic, the World Health Organization recommended frequent washing of hands with soap under running water. This proved to be a great challenge to female informal operators as most of their settlements did not have access to water. Buying water for personal handwashing as well as for their customers added a great financial burden to these women, eating into the little profit they were garnering. Nearly 300 million people in Sub-Saharan Africa live in water stressed environment. Women operators in Abuja’s Gosa Market, which lacks basic amenities like toilets, had to buy water to wash their hands. Maintaining hygiene by handwashing with soap and water was also a hurdle in Nairobi’s Githurai, Kawangware, and Ruiru markets as they similarly did not have many water points. These informal workers could not fathom affording alcohol-based liquid sanitizers that at that time retailed around US$5 to US$10.

Adequately Addressing Hardships Faced by Women in the Informal Economy

The Kenyan Government can be used as a case study of an African country that instituted a number of fiscal, monetary, and social insurance policies to address the socioeconomic impacts of COVID-19. These included tax exemptions for low-income earners and tax reductions for those with higher income, a reduction of value-added tax by 2 percent, increased funding for targeted cash transfers, and measures to increase liquidity of commercial banks. Despite the proposed benefits of these rescue packages, however, they largely excluded workers in the informal sector as most of them are neither netted in the formal tax brackets for which exemptions applied, nor are they earning above the tax threshold of 24,000 Kenyan shillings (US$226.3) per month to qualify for the tax relief. While the government mainly consulted formal sector workers, employers, and industry leaders through their representative trade unions and industry associations in developing the rescue package, the informal sector ought to also have been brought to the discussion table.

In the same vein, since informal workers often do not have bank accounts, the transfer of funds is logistically tricky. They may not pay income taxes, making tax breaks useless as a means of support. Africa can learn from Colombia where the government proactively facilitated the opening of two million bank accounts for those who previously had none, allowing for more people to receive social assistance digitally.

To mitigate the effects of COVID-19, African governments could also subsidize workers to stay at home if lockdowns persist or reoccur, similar to European countries, but there are many other forms of support that can be put in place to provide relief for informal workers, especially women. African governments should set up gender-responsive social protection systems to support income security for women. Expanded access to affordable and quality childcare services, for example, will enable more women to participate in the labor force. Furthermore, all primary caregivers should be accorded paid leave and reduced or flexible working arrangements.

In the long term, the pandemic highlights the need for governments and urban planners to plan cities with building designs that cater to traders, artisans, and peasants. These facilities should include adequate room size for work, storage, and display. Water points should also be set up in markets and other informal sector clusters with access to electricity. Informal economy operators should be assisted in leveraging on digital technologies to access the internet and boost productivity.

In addition, medical coverage such as the one proposed by Kenya’s National Health Insurance Fund (NHIF) Amendment Bill 2021 could help guarantee universal health coverage. The bill makes it mandatory for all Kenyans eighteen years or older to have NHIF membership. Currently, many people working in the informal sector have not enrolled into the program due to its voluntary nature. A challenge for many African countries implementing social health insurance is covering and incentivizing enrollment for the informal sector. There is an urgent need for proactive health insurance programs that reach out to informal sector employees through multi-pronged strategies, such as subsidies, progressive premium setting, facilitating payment collection, incentivizing insurance package upgrades, and socializing the benefits of health insurance in the informal sector.

Finally, COVID-19 offers Africa a chance to rethink its development models and poverty alleviation schemes as Africans are caught in a complex network of interdependence. It is important that direct financial resources, including cash transfers, be accorded to women, many of whose assets were wiped out in the pandemic. Increased access to affordable credit for women, who often cannot get the financing they need to start and grow businesses is essential. Expanding bank lending and directing funds to women enterprises will guarantee liquidity, rebuild assets, and encourage growth. Economic planners should disaggregate economic and development data by sex and other key characteristics to gain a fuller picture about women-owned enterprises and ultimately devise more effective policies. Expanding access to childcare for families who do not currently have it could also sustain more women in business. Understanding the perspectives and efforts of women traders and artisans might allow for viable methods of enhancing their integration into global business models. A model that takes the informal economy and women into account could be an antidote to the greed, cut-throat competition, and inequality experienced in the world which saw rich nations hoard COVID-19 vaccines as poorer countries suffered. Policies that reflect the informal economy will connect people and encourage inclusivity, self-reliance, solidarity, continuous learning, democratic governance, reciprocity, and individual and communal wellbeing.

Dr. Mary Njeri Kinyanjui is a visiting lecturer in Gender Studies at Mount Holyoke College and the founder of Beyond Knowledge Horizons.