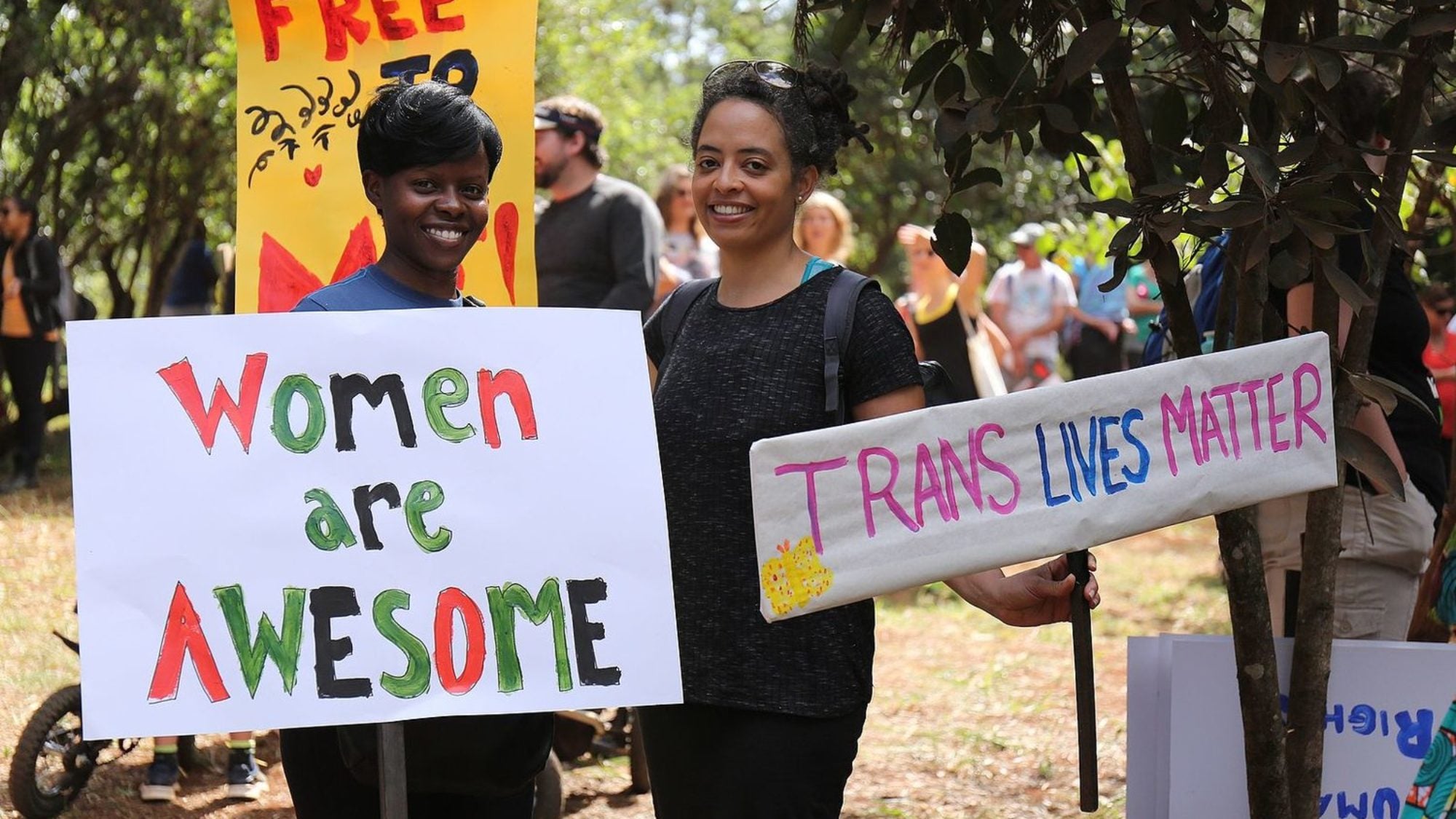 Title: LGBTIQ Rights in Kenya: On Artivism and Social Change

The struggle for LGBTIQ rights in Kenya provides a unique and fascinating case study of the powerful social change taking place right now. On May 24, 2019, the High Court of Kenya will rule on whether to decriminalize same-sex relationships, which are currently punishable by up to fourteen years in prison. The court was originally scheduled to decide this case in February but delayed the ruling, citing mounds of documents that had still not been read. Activists pointed out that judges had already had several years to read the documents, and some worried that the delay was a sign of government interference with the judicial process.

In a country where many consider homosexuality to be “un-African,” the High Court decision will mark a watershed moment in a twenty-year struggle. For two decades, a lively blend of both activism and artivism has slowly wrought change in Kenyan legal structures and civil society. The story of LGBTIQ rights in Kenya is the story of political activists, lawyers, human rights advocates, writers, artists, and musicians all struggling together to change the hearts and minds of the citizenry, as well as the legal structure of the nation-state.

When we refer to “LGBTIQ rights,” we are referring to the struggle for social and political rights for people who identify as lesbian, gay, bisexual, transgender, intersex, and/or queer. While same-sex relations (“homosexuality”) have been practiced among various groups in Kenya for centuries, it is only in the last three or four decades that Kenyans have begun to self-identify as lesbian, gay, bisexual, transgender, intersex, or (most recently) queer. While this has been a complicated process in and of itself, what has also emerged in the last twenty years is a vibrant national LGBTIQ rights movement.

Artivism refers to various forms of artwork — music, poetry, visual art, and performance art — that not only seek political change, but also engage with broader social and cultural issues. Artivism characterizes the struggle for LGBTIQ rights in Kenya, from the birth of the first LGBTIQ support group, Ishtar MSM, to the use of music videos to foster debate. While artivism is a term that draws on contemporary global trends, there are also historical precedents in Kenya for the use of poetry, song, and theater in the fight against colonialism, and against inequality in post-colonial Kenya as well. Today, savvy young people are leading the struggle for social change through the creative use of social media, film, music videos, and blogs.

Perhaps the biggest challenge in Kenya has been the struggle to change social attitudes in a country that is heavily influenced by religious fundamentalism, including evangelical Christianity and Islamic fundamentalism on the coast. According to the 2013 Pew Global Attitudes Project, 90 percent of Kenyan residents believe that society should not accept homosexuality as a way of life. To better understand this struggle for social change, it is helpful to learn some basic facts of Kenyan history.

Kenya’s now-contested penal code outlaws homosexuality as an “unnatural offense” which is defined as “against the order of nature.” This language dates back to 1930 British colonial law. Other former British colonies still retain the same laws, although both India and Trinidad and Tobago have recently overturned them in court. Prior to the colonial period and the corresponding imposition of Christianity and British Victorian values, many Kenyan ethnic groups had traditions of same-sex relations and/or gender nonconformity. Within the Nandi, Kipsigis, Keiyo, Maragoli, Kuria, Akamba, Gikuyu, and Swahili communities, there is historical evidence of same-sex relations, both between men and between women, as well as the institution of woman-woman marriage and different forms of cross-dressing during initiation rites and annual festivals.

Efforts to outlaw and eliminate same-sex relations and gender nonconformity during the colonial period were so successful that post-colonial leaders joined others in decrying homosexuality as “un-African” and anathema to Kenyan traditional values and customs. Homosexual relations are now illegal, and violence against people who engage in same-sex relations in Kenya is well-documented. Within this context of both symbolic (legal) and physical violence against LGBTIQ people, Kenyans must constantly negotiate the contradictions of queer visibility — when and how to identify as gay, lesbian, bisexual, transgender, intersex, and/or queer.

The struggle for LGBTIQ political rights in Kenya began with Ishtar MSM, the first group that was organized to advocate for men who have sex with men (MSM) in Kenya in 1999. The organization emerged after community members staged a play at the Kenya National Theater called “Cleopatra.” As noted on their website, “this play created an open and safe platform to discuss and reflect on what it means to be a homosexual.” Eight years later, at the 2007 World Social Forum meeting in Nairobi, individuals appeared in public for the first time advocating for LGBTIQ rights. The Gay and Lesbian Coalition of Kenya (GALCK) set up a tent that they dubbed “the Q spot” and distributed poetry, displayed artwork, and answered questions from the public. Founded in 2006, GALCK is a coalition of Kenyan LGBTIQ groups, including Ishtar MSM, that is now organized into three regional clusters, which make up a total of sixteen LGBTIQ organizations.

In the past ten years, events have unfolded quickly. Queer women activists, who founded Minority Women in Action (MWA) in 2006, joined with other women’s groups in the Warembo Ni Yes campaign advocating for the new constitution, which was passed in 2010. Although the new constitution explicitly defines marriage as a union between a man and a woman, it also provides broad civil and human rights protections. Legal activists are using these protections in the new constitution as grounds for challenging the most discriminatory anti-LGBTIQ government practices and laws.

Both of these activist groups began to document the mistreatment of LGBTIQ people in Kenya and to argue in support of the decriminalization of homosexuality. In 2011, the Kenya Human Rights Commission (KHRC) published the first research paper on the legal and social status of LGBTIQ people in Kenya. The Outlawed Among Us documented widespread discrimination and mistreatment. Reports by Minority Women in Action (MWA) followed in 2013 and in 2016, and Human Rights Watch joined with PEMA Kenya to produce “The Issue is Violence: Attacks on LGBT People on Kenya’s Coast.”

As part of the struggle to change social attitudes about same-sex relations in Kenya, narratives about the lives and loves of LGBTIQ Kenyans have also begun to appear in books, films, online, as well as in print. In 2013, poet and activist Kevin Mwachiro published Invisible: Stories from Kenya’s Queer Community. Mwachiro was also part of a conference in Nairobi that led to the publication of a book he co-edited, Boldly Queer: African Perspectives on Same-sex Sexuality and Gender Diversity. In 2014, the award winning writer Binyavanga Wainaina imagined coming out to his late mother in a post to the artivist blog, Africa Is a Country. And The Nest Collective, a “multidisciplinary Kenyan squad,” spent two years interviewing 250 LGBTIQ people across the country about their lives. The results of that work became Stories of Our Lives, an anthology of five short films dramatizing LGBTIQ life in Kenya. The shorts premiered at the 2014 Toronto International Film Festival, and were promptly banned in Kenya. The film’s executive producer, George Gachara, was arrested and briefly held for purportedly shooting the film without a license.

Last year, another Kenyan film made headlines at home and abroad. Rafiki, directed by Wanuri Kahiu, presents the story of forbidden love between two young women in Nairobi. The film premiered at the 2018 Cannes Film Festival, and it, too, was promptly banned by the Kenya Film Classification Board (KFCB) due to its “homosexual theme and clear intent to promote lesbianism in Kenya contrary to the law.” Eventually, the ban was lifted for seven days and the movie was shown to sold-out crowds in Nairobi.

During the past ten years, activists have also been engaging with national media to articulate compelling narratives of LGBTIQ life in Kenya. While several major Kenyan news outlets consistently produce negative representations of LGBTIQ activists and issues, the Kenya Television Network (KTN) has produced more balanced reports. In 2010, KTN published “Gay Kenyans Come Out,” a report on the public celebration of International Day Against Homophobia. It features an interview with David Kuria, one of the founders of GALCK. The report notes the legal punishment for homosexuality, implicitly recognizing the courage of the activists, and, to date, it has over 91,000 views on YouTube.

In 2014, KTN Weekend Prime produced “Being Gay in Kenya,” a feature that explores the question of how Kenyan society is grappling with homosexuality. In the report, Eric Gitari, the lawyer who co-founded the NGLHRC and who is now a leader in the legal fight to decriminalize homosexuality, describes his coming out process on social media. KTN then explores reactions from his friends and family. The segment ultimately asserts that the right to “live as you want” is both a constitutional and a Christian issue. It currently has over 124,000 views on YouTube.

Perhaps the most amusing and notorious event took place in 2015 when the music video for “Same Love (Remix)” was released by Art Attack, another artist collective in Nairobi that self-identifies as artivist. In interviews with the BBC, a member of the group (who requested anonymity) stated, “we did it with a purpose and a reason and an intention to stir up the debate.” They knew the song would not get airplay on radio or TV in Kenya due to government censorship, so it was specifically designed for YouTube. The song is a remix of the 2012 Macklemore and Ryan Lewis song of the same name featuring Mary Lambert, which became a rallying cry for gay marriage in the U.S. and worldwide. Government censors immediately banned the music video via Twitter; instead of simply referring to the song’s title, however, @InfoKfcb included the link to the music video on YouTube in their announcement. The tweet was immediately re-tweeted and, by March 2019, “Same Love (Remix)” had over 330,000 views.

The big question for May 24 is, will the Kenyan courts decriminalize homosexuality? If that happens, we will be able to credit a tenacious collection of activists and artivists for their courageous work over the past twenty years fighting for social change and human rights for all Kenyans. If the Kenyan courts decide that criminalizing homosexuality does not violate the human rights clauses of the 2010 constitution, a luta continua: the struggle continues. Social change is often slow in coming, but indicators show that it will eventually arrive for LGBTIQ people in Kenya.

Deborah P. Amory is professor of Social Science and Public Affairs at SUNY Empire State College. She holds a Ph.D. from Stanford University in Anthropology, and a B.A. from Yale University in African Studies. Her work has focused on same sex relations on the Swahili-speaking coast of East Africa, kuchu culture in Nairobi, and lesbian identity in the U.S. She is currently engaged in the open education movement developing online OER courses and an Introduction to LGBTQ+ Studies textbook.