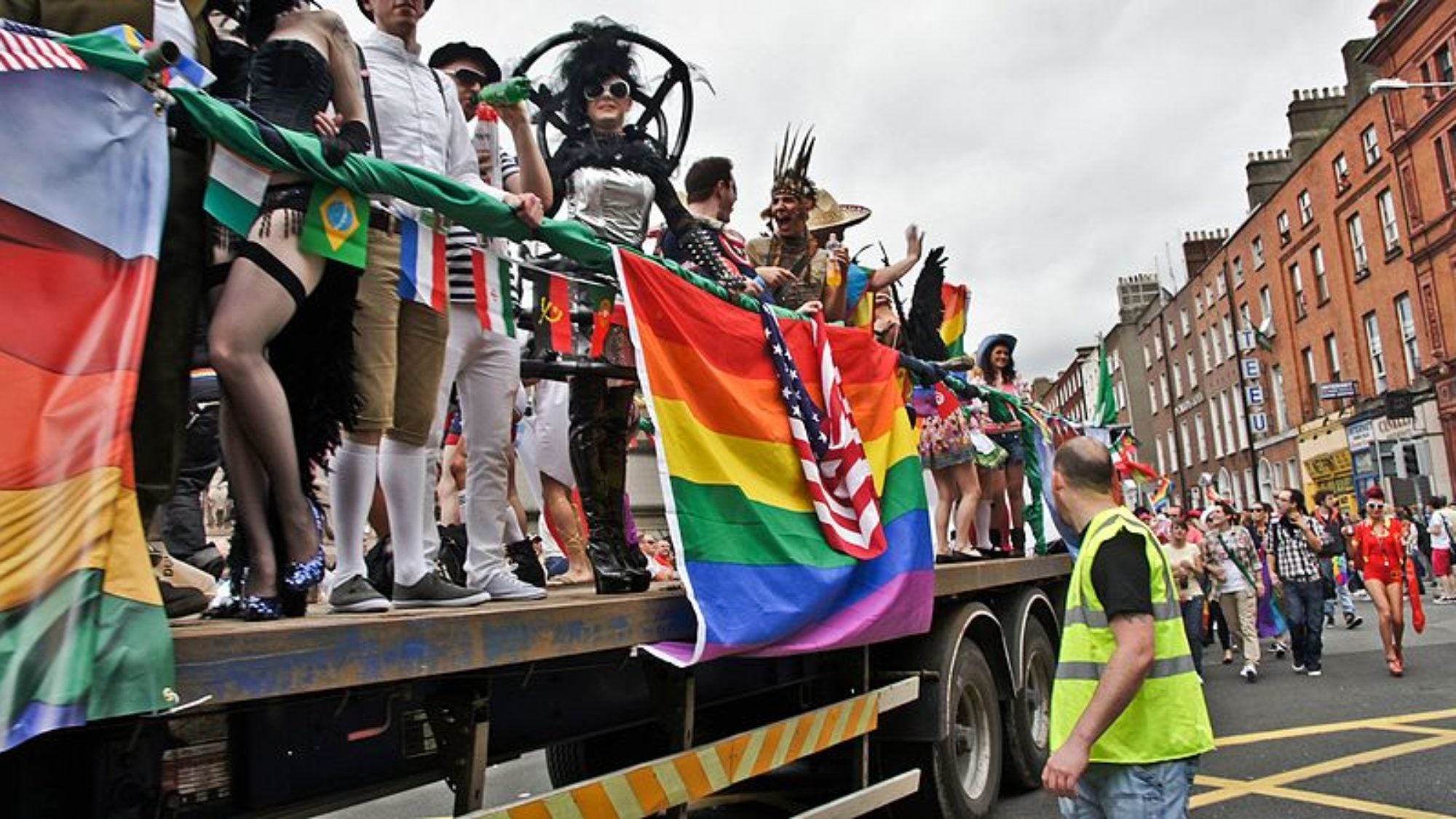 Title: Same-Sex Marriage and the Liberal Transformation of Ireland

In 2015, Ireland became the first country in the world to introduce same-sex marriage through a national referendum vote. The decision to introduce equal marriage received a great deal of attention, and not just because it was the first positive referendum decision on this issue; the vote was also preceded by a citizens’ assembly which recommended the referendum and endorsed a “yes” vote. The resounding victory for the liberal position provided definitive evidence of Ireland’s shift from a conservative, inward-looking European periphery state to a modern, liberal, and inclusive republic.

The Constitution of Ireland, adopted in 1937, was heavily influenced by Catholic social teaching and aligned with the values of the majority of citizens at the time. Article 41 envisaged a patriarchal society that linked a woman’s life in the home to the common good and prohibited contentious social issues such as divorce. Article 44 accorded a special position to the Catholic Church as the guardian of faith. Homosexuality and abortion were criminal offenses. By the 1970s, the prevailing social mores had begun to shift, and six referendums on divorce and abortion in the 1980s and 1990s led to intense culture wars. Contraception was legalized through a series of decisions in the 1980s, but abortion was constitutionally banned in 1983. A referendum in 1986 to overturn the constitutional ban on divorce failed, but a second attempt in 1995 was successful.

Decriminalization and the LGBT Movement

The Campaign for Homosexual Law Reform was founded in the 1970s, but its early activities took place against an often hostile social and political background. Homophobic attacks were relatively rare, but the murders of Declan Flynn and Charles Self in the 1980s were attributed to homophobic violence. In 1988, David Norris—then a member of the Seanad, the upper house of parliament—won a case before the European Court of Human Rights which led to the decriminalization of homosexuality in 1993. Ireland was one of the last states in Western Europe to decriminalize homosexuality. To a great extent, the state often lagged behind its citizens in updating the constitutional and legal framework for society. Attitudes toward the LGBT community had been liberalizing for some years. In 1981, 62 percent of the population was strongly opposed to homosexuality, but this had dropped to 38 percent by 2000. Ultimately, the bill to decriminalize homosexuality was not opposed by any of the main parties when it proceeded through parliament.

Social values changed sharply. Indeed, the shift in attitudes toward LGBT people in Ireland is remarkable considering the rapid transformation over a relatively short period of time. Economic growth, the collapse of the moral authority of a long authoritarian and domineering Catholic Church, and greater integration into European Union (EU) norms are widely cited as the driving factors behind the rapid liberalization. Demographics matter too. Ireland has a young population, and one that is highly educated, with more than 60 percent of those who complete secondary school taking part in some form of higher education.

Progress on LGBT rights followed quickly after decriminalization. Employment and equality laws in 1998 and 2000, respectively, prohibited discrimination on the grounds of sexual orientation, and laws providing for civil partnerships for same-sex couples were enacted in 2010. The law delivered many of the same conditions as marriage but, in effect, was discriminatory as it enshrined a lesser form of partnership. The Gay and Lesbian Equality Network had been advocating for equal rights from the 1980s, and it embarked on a professional and well-funded campaign promoting full marriage rights which would heavily influence the decision to hold a referendum. There were mixed party political positions on same-sex marriage at the start of the 2011-2016 government term, with Deputy Prime Minister Eamon Gilmore describing equal marriage as the civil rights issue of the generation while Prime Minister Enda Kenny famously fell over a flower pot in an attempt to avoid answering a reporter’s questions on the issue. Ultimately, all the main parties came to support equal marriage and campaigned in favor of the provision in 2015. The referendum passed with a large majority. Again, it seemed that Irish voters were ahead of their political leaders.

Since the referendum, same-sex marriage has not been a politically salient issue in Irish politics. Those who campaigned against the introduction of equal marriage remain active in conservative politics and were very prominent on the anti-abortion side of the referendum, which significantly liberalized abortion provision in 2018. Despite losing the abortion referendum by a large margin, the campaigners continue to lobby and articulate anti-abortion messages. However, there is little mention or activity in relation to opposing the equal marriage framework—a sign of the de-politicization of the issue and perhaps also a recognition that rolling back the reform is very unlikely.

There was a surge in the number of same-sex marriages in the immediate aftermath of the referendum vote and, on the day of the referendum count, a number of prominent campaigners proposed to each other at celebratory events. Among these was Katherine Zappone, a member the Seanad who would become a member of the government in 2016. Openly gay members of the Dáil and Seanad had been elected at several elections by 2015; most prominent among them is Leo Varadkar, who came out as a gay man in 2015 while a government minister and was subsequently elected prime minister in 2017.

National statistics show that the number of marriages of same-sex couples have now levelled off. Of the 22,626 marriages which took place in 2016, 1,056 were same-sex marriages. The number had fallen to 664 in 2018. In 2018, Ireland made it into the top five destinations for gay honeymoons, and it is also considered to be one of the safest destinations for holidays for LGBT tourists. A long-running court case in Northern Ireland, which is part of the United Kingdom, involved a dispute about whether a bakery engaged in discrimination when it refused to bake a cake with a pro-gay marriage message on it. The case provided an interesting contrast with the Republic of Ireland, where many prominent businesses were keen to support marriage equality and gain from any extra business opportunities through the change in the marriage law.

In 2018, the Prime Minister issued a formal state apology to the thousands of people who were criminalized for their sexuality in Ireland until 1993. Ireland’s first LGBTI+ national strategy was launched in November 2019, and the very existence of a strategy is a testament to the extraordinary changes which have taken place in social values and in laws. However, the strategy identifies notable deficits in the current provision of healthcare and community support. The action plan included at the end of the strategy sets out a long list of goals to be achieved by the end of 2021 and notably lists a commitment that heteronormative assumptions will be avoided in the development of all public policy so as to ensure that policy is LGBTI+ inclusive. The strategy is comprehensive, but in reading the document, it is also clear that, despite some important progress, there is a considerable program of work to be undertaken to achieve a free and equal society.

The marriage referendum vote was a critical change for the LGBT community in that it delivered a long-awaited advance in their social rights. But it was also a notable moment for the entire state, marking publicly what had been a silent revolution in social values and attitudes. Ireland was a late arrival to the group of European liberal and progressive states, but, in 2015, it was a welcome member at a time when Europe was grappling with the rise of illiberal and authoritarian sentiment.

Dr. Theresa Reidy is a political scientist at the Department of Government and Politics at University College Cork.