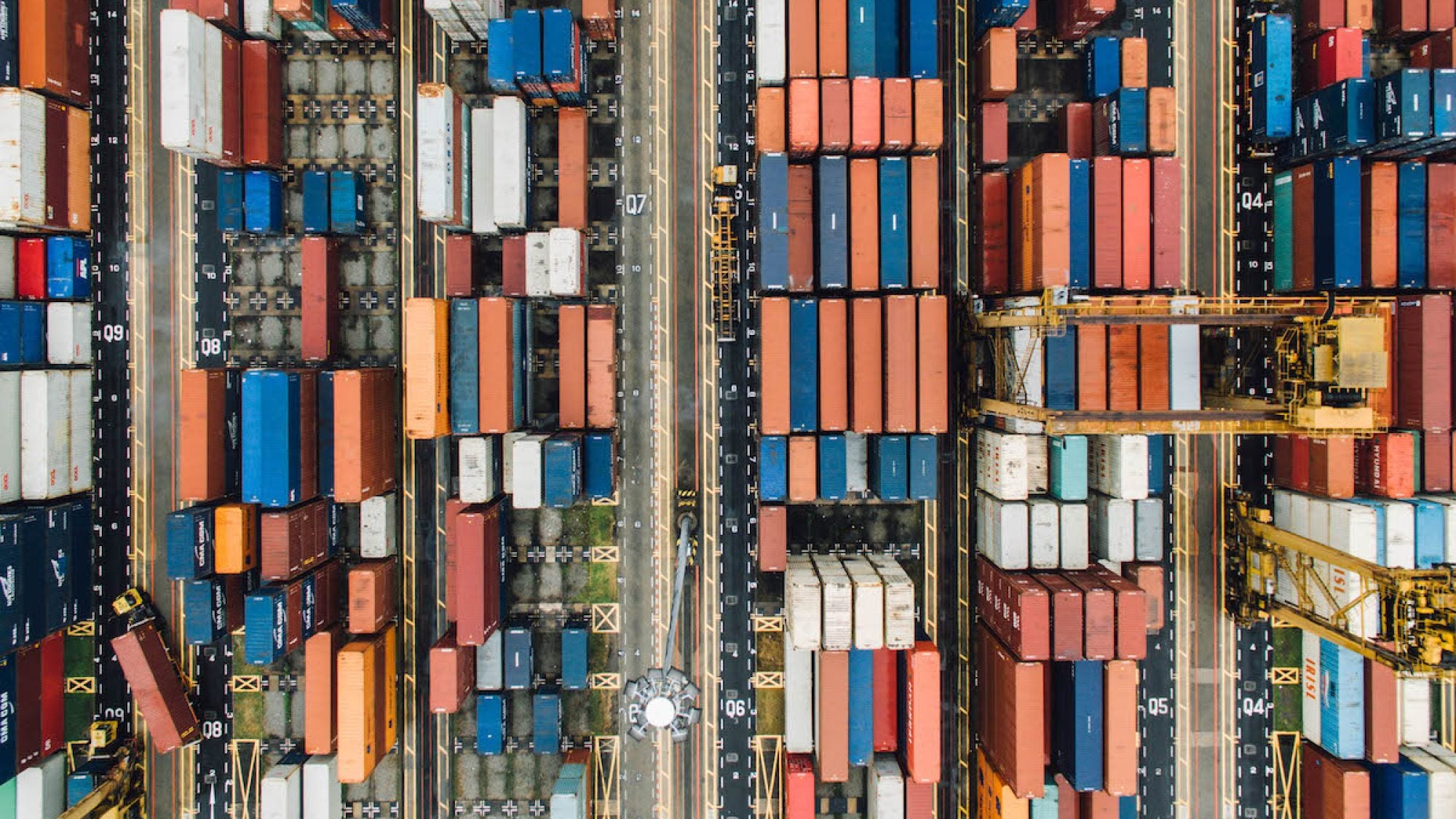 Title: Will the Belt and Road Initiative Be Another Casualty of the Pandemic?

China’s grand infrastructure development strategy, the Belt and Road Initiative (BRI), has suffered as a result of the COVID-19 pandemic, at least when measured by the amount of funds lent or invested by China in BRI projects. This decrease in funding is one of the most visible signs of China’s increasing isolationism and worsening global image.

President Xi announced China’s most important soft-power strategy on record, the Belt and Road Initiative (BRI), in 2013. It has since grown in economic and political relevance. In fact, the official number of countries included in the BRI has increased from less than seventy countries, in the six originally announced economic corridors, to 149 currently. The projects covered by this grand strategy have not only increased in number but also sectoral and geographic complexity.

However, while it was increasing in relevance, the Belt and Road Initiative suffered from a major shock: the COVID-19 pandemic. Since late January 2020, China has closed its borders to the world, with important consequences. Notably, the number of physical exchanges between China and the rest of the world has plummeted due to travel restrictions and draconian quarantine rules (Figure 1). 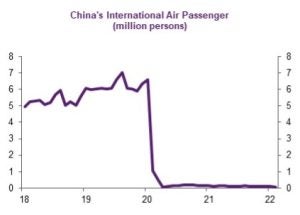 At the same time, negative sentiment about the Belt and Road Initiative, and China more generally, has been growing. This downward trend in China’s image has been further accentuated during the pandemic and is most clear among developed economies, as shown in a survey conducted by the Pew Research Center. In the same vein, the 2021 annual opinion survey conducted by ISEAS points to the same phenomenon within Southeast Asia. Beyond general surveys, my own analysis of local and international media in a large number of countries, using the big data media platform GDELT, shows a severely worsening trend in China’s image during the pandemic. The same is true for the international image of the BRI, although less intensively than for China as a whole (Figure 2). 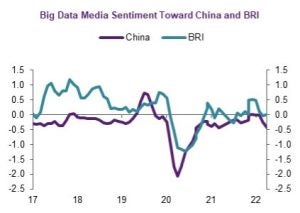 Chinese perception of the West has also worsened. The fact that China has seen very low numbers of COVID-19 cases until recently has led to a strong sense of security at home and of disarray regarding the West. Various surveys point to a clear worsening of China’s impression of the West, when compared to 2016 (Figure 3). 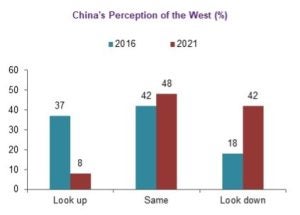 One important factor behind China’s reduced investment in BRI projects is the sharply negative economic impact of the pandemic, first in China in the first months of 2020, and then in the wider global economy, which has clearly worsened the prospects for many of these projects. First of all, uncertainty is growing about the future return of such projects given scarring from COVID-19 and the increasing number of sovereign defaults in BRI countries. The Chinese economy also needs more resources from its own financial institutions to jump-start growth, after having plummeted as a consequence of zero-COVID policies and the bursting of the real estate bubble, which makes it harder to put aside financial resources for overseas projects. Additionally, BRI countries themselves have changed their priorities, moving away from major infrastructure products towards cushioning the negative impact of the pandemic on their populations. They are increasingly reluctant to add more debt from infrastructure projects at a time of increased funding costs.

Against such a backdrop, there is ample evidence of a large number of delayed or abandoned BRI projects during the pandemic. According to an Overseas Development Institute (ODI) report, more than fifteen projects, worth over $2.4 billion, faced financial difficulties in 2020. For instance, the Kunzvi Dam electricity project in Zimbabwe, originally contracted to Sinohydro, has run into difficulties as Zimbabwe failed to pay a USD commitment fee to China Export & Credit Insurance Corporation (Sinosure). In other cases, public pressure was the main reason for the discontinuation of projects, as is the case of Kyrgyzstan’s logistical center, close to the Kyrgy-Chinese border in the Naryn region, which was impacted by China’s worsening image in the country due to local rumors of Chinese land grabs.

Looking at the evolution of Chinese investment overseas during the pandemic, per data from the American Enterprise Institute and Mergermarket, the slowdown in China’s overseas financing in BRI countries is very clear. China’s investment overseas sometimes includes control, through foreign direct investment (FDI), acquisitions of companies, or greenfield investment, where companies build plants from scratch. Most of the time, though, China only lends and does not hold equity, especially through project finance. For the former, Figure 4 shows that China’s outward FDI, whether in the form of mergers and acquisitions (M&A) or greenfield activity, has plummeted since the pandemic started, with a reduction of 72 percent from the average reached during the period from 2015 to 2019. This is also true for China’s FDI in BRI countries, although the reduction is slightly less intense—62 percent, but from a much lower base. 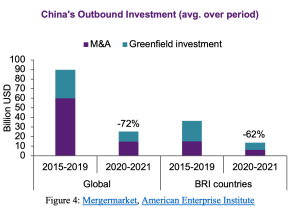 In other words, BRI geographies have never received the bulk of China’s outward FDI; China has actually invested the most in the West, through acquisition of companies or greenfield investment. All BRI regions have seen a reduction in FDI from China; however, the downturn has been more intense in the Middle East and emerging Asia, than in Latin America or Africa (Figure 5). Latin America is an outlier since it has received relatively more FDI, rather than only lending, even if it happens to be the hardest-hit region by the pandemic, as shown in the much larger reduction in mobility of its residents (Figure 6), and thereby with the most negative economic impact (Figure 7). China’s interest in acquiring assets in Latin America compared to other BRI geographies might be due to Latin American governments’ desire to privatize assets, in particular utilities, as a way to gain some fiscal space to mitigate the economic impact of the pandemic. Most of the M&A deals announced during the last two years are privatizations of power or resource extraction state-owned companies, such as State Grid’s acquisition of a 96 percent stake in Compañía General de Electricidad S.A. in Chile and Yangtze Power’s acquisition of 13.5 percent of stakes from Luz del Sur SAA in Peru, according to data from Mergermarket. In sum, China’s acquisition of companies has slowed globally, including in BRI geographies, with less of a decline seen in Latin America, due to the region’s divestment of state assets. 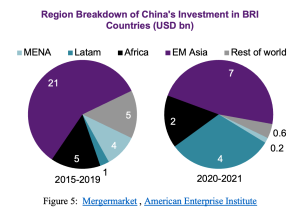 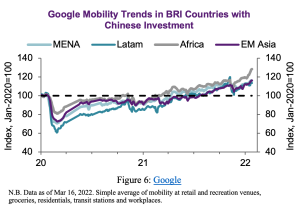 Looking at China’s overseas lending, development finance in BRI geographies has plummeted since the pandemic started (Figure 8). This is particularly problematic for countries that are highly dependent on Chinese loans to finance their infrastructure, some of which have growing current account deficits which they will need to finance. An obvious case in point is Sri Lanka, which has recently opted for defaulting on its foreign debt, much of which is constituted by Chinese loans. 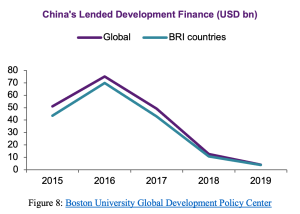 The key question here is whether the sharp slowdown in China’s BRI-related investment and lending is only temporary and therefore bound to resume as the pandemic becomes endemic. At first glance, recovering the pre-pandemic level of investment is likely as China should, in principle, still be interested in the same strategic goals it set in 2013 when the BRI was first launched—building infrastructure globally to further link China to the rest of the world, promoting Chinese exports, reducing its overcapacity, and enhancing China’s soft power. One could argue that China should have even more motivation that it did back in 2013 to promote BRI projects, as a means of avoiding the potential isolation stemming from the US push to contain China. Against such a backdrop, the BRI appears as a well-established platform for China to develop alliances and partners overseas. Beyond the US’s quest for support from like-minded partners, another potential source of competition is coming from the European Union, namely its newly established €200 billion Global Gateway project, which intends to help the EU lead sustainable physical and digital infrastructure projects overseas.

While increasingly important for China, there are two important constraints that might put at risk the continuation of the BRI, at least in terms of its original definition and scope as envisaged by President Xi. First, China is far from turning the page on the COVID-19 pandemic, at least when compared to the rest of the world. Its zero-COVID policy, even in its current dynamic form, is still reducing business exchanges. For example, the annual air traffic between China and the US shrunk by 35 percent as of June 2020, and as much as 86 percent as of June 2021, compared to 2019. Such trends have only worsened since. More recently, the Chinese economy is undergoing a very rapid deceleration due to the draconian mobility restrictions imposed nationwide and especially in Shanghai, China’s most important financial center and supply chain hub, during the severe Omicron wave in the second quarter of 2022. The slowdown is putting additional pressure on banks to lend domestically rather than overseas. Such lending is essential in the financing of major infrastructure projects overseas. Furthermore, the tighter grip of overseas regulators, especially the US, has been limiting Chinese corporations’ ability to raise funds in hard currency, whether through listings in foreign stock exchanges or offshore bond issuance.

It is too early to tell what the future of China’s BRI Initiative will be once the pandemic comes to an end. What is clear is that the more China remains locked within its own borders, the harder it will be to push for the same level of ambition with which President Xi started this grand strategy. China’s overseas investment is bound to remain muted, limiting the number of infrastructure projects the country can embark on. Cross-border mobility restrictions will also hamper China’s ability to construct overseas as it relies on the use of Chinese manpower. In the same vein, China’s need to refocus its financial muscle domestically to jump-start growth after the pandemic diverts attention from new BRI projects. Furthermore, the demand for mega projects from BRI countries is waning as borrowing costs surge given the FED’s tighter stance and as its economic situation suffers from the aftermath of the pandemic.

All in all, among the many casualties that the COVID-19 pandemic has brought about, China’s grand strategy, namely the Belt and Road Initiative, could end up being one. China will surely try hard to keep the BRI alive, given the huge amount of financial resources invested in BRI projects, but the measures needed might go counter to the spirit behind the dynamic zero-COVID policy, which remains high up in Xi Jinping’s agenda. From the recipients’ perspectives, and given the large amount of debt they have already piled up, China’s reduced interest in the BRI could be a blessing in disguise at a time when funding for such massive infrastructure projects is much higher than it was when the BRI was launched. It seems the time has come for all to reassess the need of such mega projects given their cost and the emergence of new priorities in a post-COVID world.